The 2006 Australia Falun Dafa Cultivation Experience Sharing Conference was held at City Hall of Bankstown in Sydney on November 19, 2006. Falun Dafa practitioners from around Australia attended the conference. Some people wanting to learn about Falun Gong also attended the Fa conference. 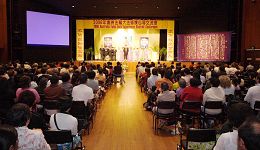 Compassionate, great Master sent a congratulatory message to the Fa conference, and all attendees deeply felt revered Master's enormous benevolence. Master earnestly taught disciples in the congratulatory message that studying the Fa well is the key for Dafa disciples to do well the three things. Once again, Master pointed out for Australian disciples on how to walk righteously and walk well on the path of cultivation.

The Fa conference started at 9:00 a.m. sharp. When the host read Master's congratulatory message to the audience, the whole audience applauded warmly. Nineteen practitioners made speeches sharing how they made use of various opportunities to clarify the truth to people from different circles and offer salvation to sentient beings. The process of truth clarification is actually a process of cultivation. 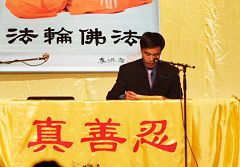 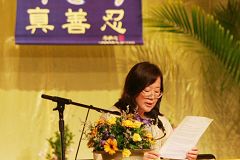 The first speaker was practitioner Wang Xiaojie from Center Coast, New South Wales. The topic of her speech was "Xinxing Elevates amid Reciting the Fa." Ms Wang started practicing Falun Gong in July 1999. Inspired by fellow practitioners' articles published on Clearwisdom.net, she had an idea of reciting the Fa in 2003, though at the beginning she recited the Fa based on selfish intention, and with an attachment to pursuit. During the Fa recitation in the past years, she has experienced a complete change in the origin of her life, which is hard to describe in language. While reciting the Fa, Master hinted to her several times and enlightened her to Fa principles of the different levels she was at, and her compassion has been cultivated layer after layer.

Practitioner Dong Lingling from Sydney shared her experience of eliminating attachments in different cultivation environment after leaving mainland China to go overseas. She was arrested three times when she was in mainland China, twice being detained at a detention center, and once being arrested and sent to a brainwashing center. With her determination in Dafa and with Master's protection and strengthening, she broke through all the way. After arriving in Australia, living in a peaceful and relaxed environment where there is no persecution, she can freely participate in any Dafa activities. However, in relaxed environment, the difficulty of cultivation is increased. Things that could would not be encountered in China, and the attachments that are hidden deep have to be eliminated in the new cultivation environment. Facing a shortage of money and interference of sentiment in family, the unbearable pain and discomfort when letting go of attachments, she realized that it is even more likely that one will slack off in this free and relaxed environment. Her requirements on herself unconsciously lowered. Only by truly understanding according to the Fa, can one control oneself, and eliminate all unrighteous thoughts.

The spokesperson for the Melbourne Falun Dafa Association, Michael Person-Smith, talked about how he discovered his deeply hidden jealousy. While working as a spokesperson, he unwittingly grew an attachment to validating himself. Sometimes he would get on the Internet to check his "online status," and upon seeing his name and photos, he would become complacent. Another western practitioner who is rather eloquent moved to Melbourne, and Michael noticed that he often paid attention to his speech, and he seemed to care much about that practitioner's objection to his opinions. He even talked with other practitioners about his dissatisfaction with that practitioner. Through continuous Fa study, he realized that this practitioner was actually arranged to be there to expose his jealousy. As a cultivator, it is the top priority to eliminate attachments.

Ms. Xu from Brisbane, Queensland shared her experience and understanding of truth clarification through holding anti-torture exhibits during the past two years. At the beginning, practitioners held anti-torture exhibits at the busiest section in downtown Brisbane. Some Chinese people who had not learned about the truth cursed them and reported them to the police, causing many people to surround and watch them. They used this opportunity to clarify the truth. One week later, a Chinese man came again, and carefully read contents of each display board, then quietly left in deep thought. Ms. Xu understood that everyone today comes for the Fa, and everyone has his understanding side. No matter what attitude people have, we cannot judge them on their behavior on the surface, but we should instead break through the human notions, so as to rescue sentient beings.

Western practitioners Sonya and Key made speeches entitled, "Western Practitioners Step Forward to Clarify the Truth," and "Cultivation Experience of Participating in the Divine Land Marching Band," respectively. Sonya talked about how she let go of the attachment to fear one step after another, and how her xinxing improved when going to Singapore to support the local lawsuit.

Xiao Zhonghua, a teacher from Melbourne started practicing Falun Gong at the end of 1998. He made use of the opportunity of working at school, and clarified the truth about Falun Gong to more than a thousand people, so that they had opportunities to be saved by Dafa. He gave a particular example in his speech to show that the Chinese Communist Party's persecution of Falun Gong has been spread to every field, including middle school students' college entrance examinations. On one occasion, his sister's school in China sent a teacher and more than twenty students to his school in Melbourne for a two-week exchange activity. That teacher told him about his personal experience in China. In 2004, when he marked Chinese test papers for college entrance exams, he read an outstanding essay. The essay discussed the truly stable role that religions and beliefs, and traditional morality play in a society, and further talked about several major religions in the world including Falun Gong. As a rule from higher authorities, all essays talking about religions and beliefs, and particularly Falun Gong would be considered "failing" the exam, but according to the standard for essays, this article should be given a full mark. Instead they gave this student only 19 marks. Thus, this student was unable to go to college due to the result of his Chinese test, although he got excellent marks on all other subjects.

A group of practitioners from Sydney who made phone calls to mainland China to clarify the truth shared their experiences of eliminating attachments to fear, and overcoming human notions while making phone calls to Chinese people to persuade them to quit the CCP and its affiliated organizations. The process of making phone calls is actually a comprehensive test for practitioners' cultivation states, including their understanding of Fa principles. They clarified the truth to different persons with different states of mind in a short period of time, using their wisdom and compassion cultivated in Dafa, to touch people's hearts and inspire their understanding sides to make the right choice for their own lives.

Young practitioners shared their truth clarification experience gained during a car tour. Early this year, young practitioners from Sydney spontaneously organized a car tour to Adelaide. The temperature in local area was as high as 47 degrees (116¢X F), and fourteen young practitioners, the youngest of which was five years old, clarified the truth to local people under the burning sun. Every evening, no matter how late and how tired they were, they would study one chapter of Zhuan Falun, and even the five-year-old practitioner read with them. Everyone earnestly exchanged understandings and studied the Fa, so their truth clarification went very smoothly. They met with local MPs and the media. During the six-day car tour, these young practitioners felt Master's compassionate protection, fellow practitioners' kindness and diligence, including the local people's smiles, and they also saw their shortcomings. The young practitioners' car tour was also a process of solid cultivation by sharing with each other in study and cultivation.

At noon, more than ten students from Minghui School came to the stage to recite poems from Hong Yin for the audience. At 5:00 p.m., the Australia Falun Dafa Cultivation Experience Sharing Conference successfully came to an end.

“Venezuela: Introducing Falun Dafa and Clarifying the Truth in the Capital City of Caracas (Photos)”