(Clearwisdom.net) The Chinese Communist Party's (CCP) atrocities of harvesting organs from living Falun Gong practitioners for profit, and the wide spreading of the Nine Commentaries on the Communist Party both help the Chinese people become clear-minded about the CCP's violent and deceptive nature. The Communist Party, with it's "party culture," has damaged traditional Chinese culture and morality. As a result, the Chinese people have completely lost hope in the wicked Party, and have renounced the CCP and its affiliated organizations. The number of withdrawals has reached 15 million. People in different countries around the world have held various activities to express their support for these brave Chinese people. Singapore Falun Gong practitioners also expressed their support by informing local people of the great deeds of the Chinese people and the grand trend of withdrawals from the CCP and its affiliated organizations. 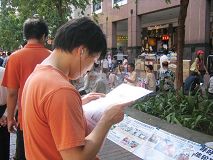 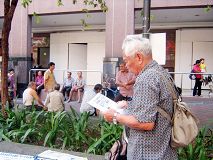 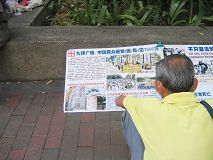 A Singaporean older man squats in front of the display boards, looking at them for a long time 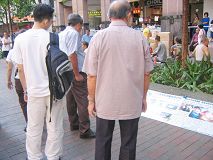 Some Singapore media, such as Lianhe Zaobao (a Chinese newspaper) hid the facts, and made false reports on a recent case where the police brought unreasonable charges against Falun Gong practitioners. Once again, the local media smeared Falun Gong and mislead the local people. Falun Gong practitioners, however, still persist in telling people about the grand trend of withdrawals from the CCP and the CCP's brutality.

The police confiscated practitioners' display boards that help to clarify the facts about the grand trend of withdrawals and expose the brutal persecution of Falun Gong practitioners. Practitioners were required to pass an investigation over "applying for a public entertainment pass." The police insisted that practitioners apply for a permit to display the photos, although the activity has nothing to do with a "public entertainment pass." Under such difficult circumstances, practitioners wrote to five police divisions, emphasizing in the letters that Falun Gong practitioners have been brutally persecuted. It is not only a matter related to Falun Gong practitioners, it also involves all Singapore people, because Singaporeans also go to China for organ transplants. It is also related to our basic human rights as ordinary people to support those brave Chinese people who have quit the CCP and its affiliated organizations. We must make such brutal news as harvesting organs from live innocent people known to everybody.

Practitioners also made requests in their letters to apply for a permit to display photo boards. They stated that they would continue clarifying the truth and supporting brave Chinese people who quit the CCP until the permit is issued. When practitioners delivered letters to the police, the police reiterated that they had no way to help as they are under orders from their superiors. They have to confiscate the display boards for the sake of their jobs and families. There is a system called "Standard Operation Procedure (SOP)" like the CCP's Central Propaganda Department, monitoring Falun Gong in Singapore. Practitioners expressed understanding to the police, and also told the police that they cannot disregard the CCP's brutality for the sake of their stable job. The brutality is still going on. At the same time, practitioners also told those people who go to China for organ transplants, the crime of "killing one person to rescue another" should not be allowed to happen.

While facing the police charges, practitioners still took to the streets to express their support for 15 million brave people who quit the CCP, and tell the local people of the CCP's atrocities and brutal persecution of Falun Gong. Some people who have learned about the truth were moved to tears. Some wanted to learn Falun Gong. Some wanted to quit the CCP immediately on the spot. Some requested the book entitled, the Nine Commentaries on the Communist Party. Even though some people are still deceived by the state-controlled media, Falun Gong practitioners believe that those people will change their minds with practitioners' compassionate and persistent truth clarification efforts.