On November 11, 2006, the Taiwan Alliance for Democracy and Human Rights and Global Alliance for Breaking Away from the CCP held a press conference entitled "The Wave of Quitting the Chinese Communist Party--the Domino Effect of the 15 Million Withdrawals" at Harvard Plaza on the campus of Chung Hsing University in Taichung City. Falun Gong practitioners and others who have have been persecuted by the CCP were invited to the press conference.

The skit--"The Domino Effect of Quitting the Party" 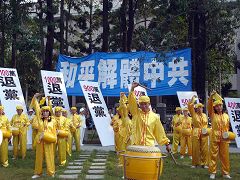 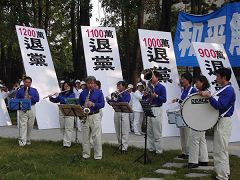 Falun Gong practitioners perform to support the wave of quitting the CCP.

Chinese defector Mr. Jia Jia, the secretary general of Science and Technology Association in Shanxi Province, who left his Chinese tour group after arriving in Taiwan, made a phone call to the press conference from Thailand, where he holds temporary refugee status. On the call, he publicly testified to the growing popularity of the wave of Party resignations in China.

Chang Chichung, the president of Yumin Hospital, and Tseng Chaorong, a representative from Taichung City, attended the press conference. They condemned the CCP's harvesting organs from living Falun Gong practitioners. They also called upon the medical community in Taiwan not to get involved in the illegal organ transplanting.

Mr. Dai Pingshan, a democracy movement activist who had just returned to Taiwan from Mainland China in October, gave a talk at the conference. Mr. Dai was jailed in China for five months. The CCP threatened him and tried to force him to work for the CCP as a spy. Mr. Dai recognized the evil nature of the CCP. He said that most Chinese people are still living in poverty. He reminded the Taiwanese people not to be deceived by the CCP's lies.

At the end of the press conference, a group performed a skit called "The Domino Effect of Quitting the Party."