(Clearwisdom.net) On July 6, 2006, independent investigators, former director of the Asian Pacific Division of Canada's Foreign Affairs Ministry and member of Parliament, Mr. David Kilgour, along with human rights lawyer, David Matas, released an independent investigation report after a two-month investigation into allegations that vital organs are being seized from Falun Gong practitioners in China. The report concludes that "the government of China and its agencies in numerous parts of the country, in particular hospitals but also detention centers and 'people's courts', since 1999, have put to death a large but unknown number of Falun Gong prisoners of conscience. Their vital organs, including hearts, kidneys, livers and corneas, were virtually simultaneously seized for sale at high prices, sometimes to foreigners, who normally face long waits for voluntary donations of such organs in their home countries." This crime has and is still continuing. Mr. Matas called the harvesting of organs from living Falun Gong practitioners an evil that has never happened on this planet before.

After the horrifying discovery of organ harvesting from living Falun Gong practitioners, and the immediate cremation of their bodies to destroy the evidence, was exposed on March 4, 2006, the Falun Dafa Association and the Clearwisdom websites founded the "Coalition to Investigate the Persecution of Falun Gong in China" (CIPFG - also called "Coalition to Investigate the Persecution") on April 4, 2006. CIPFG is calling on international groups and organizations to thoroughly investigate the Chinese Communist Party's (CCP) criminal persecution of Falun Gong and help end the persecution, which has lasted for seven years.

Based on an investigation lead published on September 16, 2006, "Sources of livers for liver transplant at Jiujiang No. 1 People's Hospital, Jiangzi, are unknown," CIPFG investigated the allegation. The following dialogues were recorded from telephone interviews. 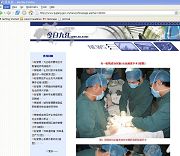 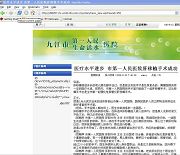 About Sources of Organs (phone recording)

Investigator: Hello. Is this the Uropoiesis surgical department at Jiujiang No. 1 People's Hospital?

Investigator: Do you perform kidney transplants?

Hospital: Yes we do.

Investigator: My sister needs such a transplant. How long is the waiting period?

Hospital: We have already lined up many patients at this time. Alas, it is difficult to find a matching kidney. What's her blood type? How old is she?

Investigator: She is in her 40s, and her blood type is B.

Hospital: Please call the organ transplant center near Jiangxi Nanchang University. They perform kidney transplants. The cost may be higher, but they can find a kidney for transplant faster than us.

Investigator: Which technique are you most familiar with, liver or kidney transplant?

Investigator: I saw reports on your liver transplants. What's your success rate?

About the Sources of Organs (phone recording)

Investigator: Who are the donors for livers and kidneys you use in your transplants?

Hospital: Some from Guangdong, some from Wuhan. Patients need to register first so we can find a matching organ.

Investigator: Which hospital in Wuhan would you recommend?

Hospital: The transplant Center at Tongji Hospital. Patients at that center come from throughout the nation, and many from southeast Asia. They have connections with the military and the court, therefore they have no difficulty providing matching organs. Recently, many organs were provided by the court.

Investigator: Wuhan is far away. Can an organ still be used if transferred from there?

Hospital: We use airplanes. Usually the time limit is six hours from the time the organ is removed.

Investigator: Aren't there many prisoners?

Hospital: It is not that easy. A match has to be made, which includes not only the blood type. Matching the blood type is only the first step. Then a white blood cell antigen, PRA, and lymph test has to be done. We have no control over the organ source. Right now the court has strict control of it. There is nothing we can do if they don't want to sell them to us.

Investigator: I heard there are still many Falun Gong practitioners?

Hospital: That is the court's business and we don't know the details. Sometimes there are suitable ones and they give us a few. Your best bet is to go to Wuhan...

Organs Are Removed from Living Prisoners

Investigator: Did the organ come from a live source for the liver transplant your hospital performed on August 5?

Hospital: The transplant for that liver cirrhosis patient was successful. The liver source was from the transplant center in Wuhan.

Investigator: The liver from a live person for the transplant ensures success?

Hospital: Which live person would give a liver to you? They are all from prisoners. If they don't execute them, how can a live person willingly give you his liver? A person has only one liver.

Investigator: But livers from dead bodies can't be used. On your advertisement it says "live liver transplant."

Hospital: The prisoners are alive before being executed, aren't they? Then...

Investigator: So, their organs are removed before they are dead, aren't they?

The First Affiliated Hospital of Nanchang University is the largest hospital in that region. They provide medical treatments, teach, and do research. During recent years, the hospital began performing organ transplants -- heart, liver, kidney, pancreas, cornea, marrow, etc., as well as organ matching.

Huazhong University of Science and Technology Affiliated Tongji Hospital is a large educational hospital and overseen by the Department of Public Health. The organ transplant department at this University is listed as one of China's key research centers. It has the largest organ transplant center in the country and can perform different transplants, including fourteen types of organs and tissues, including liver, spleen, pancreas, kidney, thyroid gland, chest gland, marrow and brain tissues. According to a report from CIPFG, during February 2005 only, the center performed more than 1,000 kidney transplants.

In July 2006, during the first World Transplant Conference in Boston, criminal charges were filed against the attendees Chen Zhonghua, president of Tongji Hospital Transplantation Research Institute in Wuhan City, and Shen Zhongyang, the director of the Oriental Organ Transplantation Center at the Number One Center Hospital in Tianjin City, for harvesting, stealing and selling organs from prisoners, including Falun Gong practitioners in prisons without their consent. They were sued for crimes of torture and genocide.

The following are some telephone recordings provided by CIPFG. Doctors from those hospitals admitted that Falun Gong practitioners are some of the sources for live organ transplant.

Q: Is this Wuhan Tongji Hospital?

Q: Is this the Uropoiesis surgical department? Do you perform kidney transplants?

Q: When did you begin the mass kidney transplants?

A: We were one of the first hospitals for such procedures. It was a long time ago.

Q: How many transplants do you perform annually?

Q: As a patient, we want a kidney transplant from a living person. Are you using organs from living prisoners, such as Falun Gong prisoners' live organs? Is this possible?

Q: In your area, are there enough Falun Gong prisoners as a source for organ transplants?

A: Yes, there are. You can come here to discuss the details... .

“Practitioner Mr. Liu Jianwen of Xinzhou City, Shanxi Province, Dies at 38 as a Result of the Persecution (Photo)”