(Clearwisdom.net) On November 12, 2006, Falun Gong practitioners participated in a rally "Supporting 15 million people quitting the Chinese Communist Party (CCP) and its affiliated organizations." The rally was held by the Boston Service Center for Quitting the CCP in Boston’s Chinatown. 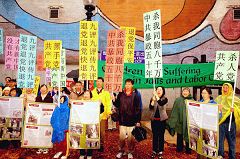 Ten representatives from different circles spoke at the rally. Falun Gong practitioner Charles Li who was once illegally imprisoned for three years by the CCP said that human words can't precisely describe the Communist Party’s wickedness and brutality. Only by breaking away from the CCP evil specter will the Chinese people have a peaceful and wonderful future.

Vice-president of the New England Cambodian Transmission Company Sareth Sak talked from his own experience of being persecuted and arrested by the Communist Party in Cambodia, and called on people to work together to sanction the Communist tyranny.

Xie Zhongzhi, chairman of the China Democratic Long March Foundation condemned the CCP’s crimes and its damage to the Chinese culture and morality.

Xu Binghuang, chairman of the Global Alliance for Democracy and Peace, Boston branch, sent a letter expressing his respect for the 15 million brave people who have renounced the CCP and its affiliated organizations.

Ms. Zhou, from the Boston Service Center for Quitting the CCP, brought messages from her friends in mainland China. Tens of thousands of people inside China want to quit the CCP, but are unable to find an appropriate channel. Ms. Zhou helped all employees and more than twenty family members in a company in Shanghai to announce their withdrawals from the CCP and its affiliated organization on the The Epoch Times website. Ms. Zhou pointed out that quitting the CCP is irresistible, and hoped that fellow countrymen in Boston’s Chinatown will hurry to quit the CCP and its affiliated organizations for their own safety.

Ms. Luo, a retired middle school teacher, and Mr. Wang, former section chief of transportation in a railway bureau, listed a series of true stories that illustrated the persecution imposed upon them by the CCP. They told people that all that is said in the Nine Commentaries on the Communist Party is absolutely true.

The rally peacefully concluded with Michael Feltz’s guitar performance, "Voice of Freedom in China," and a vigorous Tang drum performance.