A grand parade is held in San Francisco on Veteran's Day each year. This year, the US West Divine Land Marching Band participated in the parade for the first time and caught people's attention. One organizer of the parade said the band was very eye catching. 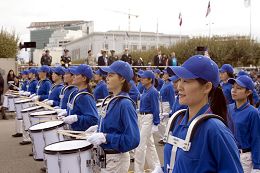 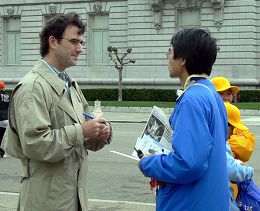 There were one hundred groups participating in the parade, including veterans' and US Army military bands and guards of honor. Among the processions, the peaceful Falun Gong practitioners' procession won spectator's applause along the route, showing their welcome and support. 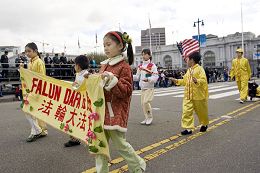 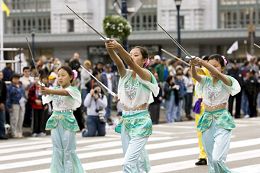 Mr. Rene Champagne, an organizer of the parade, thanked practitioners for their excellent performance and said, "Very wonderful."

One lady thought the practitioners' procession was special after seeing the band's performance. She said that everyone walked in an upright and vigorous way.

Practitioner Hong Zhang said that the band participated in the parade for the first time. She said, "The host organization praised us highly and welcomed our participation in their event. They are from the army and saluted us when we proceeded by the stage. We had an excellent performance in the parade."

She said, "Whenever there is such an opportunity, we need to participate so that people will see the grace of Falun Dafa." 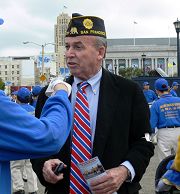 Mr. LeRue James is a veteran of World War II and the Korean War, and an officer of the San Francisco Navy Pier. When the practitioners' procession reached the destination of the parade, he attempted to invite all the practitioners in the parade to lunch. Talking about the performance of the Divine Land Marching Band, he said, "I liked it very much. Wonderful." Falun Gong's procession expresses a belief, a promise, and support for graceful moral values. Hearing that the Chinese Chamber of Commerce denied practitioners' participation in the Chinese New Year Parade in Chinatown, he said that he and his friends did not agree with the chamber.

Supervisor Fiona Ma, who just won an election for California Assemblywoman, also showed up on the presiding stage. She said that veterans fought and sacrificed for the US so we could have freedom and democracy. She also expressed appreciation for Falun Gong practitioners' participation in the event.

Practitioner Dr. Wei Chu said, "People in the world face war. We want to have them see the graceful principles of Truth-Compassion-Tolerance. When people see such a peaceful and graceful practice, they have deep feelings. We want to bring the information to more people."

“Some Understandings on Master's New Article, "Thoroughly Dissolve the Evil"”