Finland: "The Gods Sent Them Here to Learn the Truth" (Photos)

On November 5, 2006, to mark the number of people who have publicly renounced the Chinese Communist Party (CCP) and its affiliated organizations having reached 15 million, the Service Center for Quitting the CCP in Finland and volunteers from The Epoch Times newspaper were joined by Falun Gong practitioners at the Helsinki Central Railway Station. They held an event to publicize the news to the Finnish people and to support Mr. Jia Jia, secretary of the Association of Science and Technology of Shanxi Province, China, who openly severed his ties with the CCP when he visited Taiwan as a tourist. Pictures exposing the CCP's relentless killing of 80 million Chinese people and its inhumane persecution of Falun Gong were on display and caught the attention of many passersby. 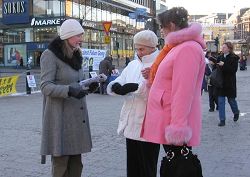 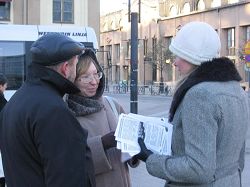 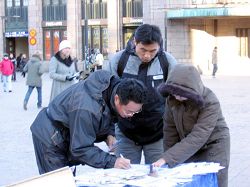 Ms. Jiang, a volunteer for the Service Center for Quitting the CCP, said she still remembers what she witnessed when the CCP massacred students and citizens in Tienanmen Square on June 4, 1989. That day she openly quit the CCP, and for this she was jailed and shocked with electric batons by police. She was glad to see that 15 million Chinese people have woken up from the CCP illusions. She has been helping to spread the Nine Commentaries on the Communist Party and to motivate more people to quit the CCP. She said, "When I offer fliers to people, some of them responded positively by praising us and saying that we have been doing well, and they thank us when they accept the fliers."

Several Russians, upon learning the truth about the CCP persecution of its own citizens, said that they completely believed that the CCP could commit these atrocities, similar to the Communist Party of the Soviet Union and the North Koreans.

A Finnish person did not understand what "CCP" stood for on an English banner. A volunteer then explained that it stood for "Chinese Communist Party." When he heard the description of the evilness of the CCP that is discussed in the Nine Commentaries, he nodded, saying that he understood now.

An English speaking foreigner was shocked when he heard about the CCP's inhumane atrocities of removing organs from living Falun Gong practitioners. He said he had never heard of this before, and it was really hard for him to imagine this was happening in today's world. Then he signed his name opposing the CCP persecution of innocent people.

A Finnish woman told a volunteer that she had met many Chinese people in Finland. She believed that they were sent there by the Gods to learn the truth.