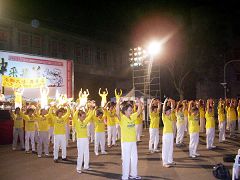 Many people take photos of the Falun Gong demonstration 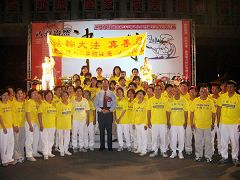 Falun Gong practitioners participated in the festival and demonstrated the five exercises. The practitioners movements were orderly and peaceful. Spectators watched and some began to learn the movements on the spot. Reporters and other festival visitors took photos from various angles to capture the peaceful scene.

The head of Gongshan Township, Mr. Wu, also watched the demonstration from start to end. He was surprised to see that even little practitioners could do the exercises so well. The practitioners also used this opportunity to clarify the truth by telling him about the Chinese Communist Party's inhuman organ harvesting crimes and persecution of Falun Gong. The truth-clarification helped Mr. Wu and many visitors at the festival learn more about Falun Gong and the persecution in Mainland China, and it further exposed the Chinese Communist Party's lies and atrocities.

“The Life of Ms. Tian Yuling in Heilongjiang Province Is in Danger Due to Brutal Force-Feeding”