On November 4, 2006, Swedish people participated in a rally held at Stockhlm, the capital of Sweden in spite of wind and snow, expressing support to the 15 million brave people who have quit the Chinese Communist Party (CCP) and its affiliated organizations. The event was jointly held by the Sweden Service Center for Quitting the CCP, The Epoch Times in Sweden, and the Organization of Supporting Human Rights of China. Falun Gong practitioners were also invited to take part in the activity. 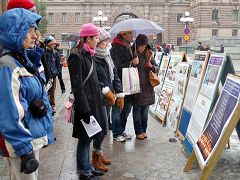 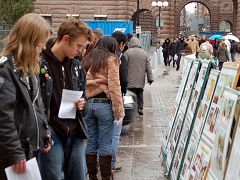 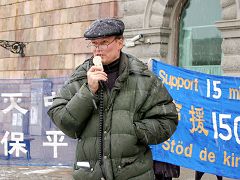 Torbjorn, a Falun Gong practitioner, exposes the persecution by the CCP

Ms. Zhangyi made a speech first, with banners reading "Support 15 Million People Quitting the CCP," "Support Jia Jia, Breaking Away from the CCP," "Heaven Will Destroy the CCP, Quit the CCP to Keep Yourself Safe," "Without the Communist Party, There Will Be A New China" in both Chinese and Swedish as a foil. She said that the book, the Nine Commentaries on the Communist Party, an editorial serials published by The Epoch Times, has sparked off a spring tide of quitting the CCP and its affiliated organizations. Up to now, there have been 15 million Chinese people withdrawing from all related organizations of the CCP. There is a Voluntary Service Center for Quitting the CCP in many countries. Jia Jia has come out with a piece of important news, that in mainland China many people are quietly discarding the CCP even though they do not talk about it with one another. This is sure to be happening right now! Furthermore, the real number of people quitting the CCP has already far exceeded 15 million.

In her speech, Ms. Pirjo, a representative of The Epoch Times in Sweden, spoke highly of the courage of 15 million brave Chinese people having broken from the CCP. Following Mr. Yuan Sheng, Mr. Jia Jia's coming forth today has strongly proved the fact that the spring tide of quitting the CCP is spreading swiftly in China. She said that The Epoch Times will continue to support human rights in China.

In his speech, Mr. Vasilios, a representative of the Association of Supporting the Human Rights in China, pointed out that within two years after The Epoch Times published editorial serials, the Nine Commentaries on the Communist Party, the tide of quitting the CCP has spread all over China. The CCP has been blocking this piece of news. Being heedless of his own personal safety, Jia Jia has exposed the tide of quitting the CCP internationally. We admire his morality and courage. Fifteen million Chinese people have abandoned the CCP, which has turned a new leaf in the history of China. And we are delighted with the awakening of the Chinese people.

In his speech, Torbjorn, a Falun Gong practitioner, disclosed that the CCP has been cruelly persecuting Falun Gong practitioners since July 1999. Using his own experiences, he told of the practice of Falun Gong having brought positive changes to both his mind and body. He also condemned the CCP for slaughtering people who believe in "Truthfulness-Compassion-Forbearance."

A Finish Chinese man who came to Sweden while traveling had a chat with one of the volunteers at the Service Center for Quitting the CCP. He said, "I think that The Epoch Times is a very good newspaper. It offers numerous people a new angle of view when they look at various topics. It is a new channel of obtaining information. Because of being influenced by the public opinion environment in China, many people are hoaxed and brainwashed by the CCP. It is very difficult for them to tell what is right and what is wrong. It is so wrong that the CCP still implements Internet blockage and the control of public opinion in present information age. Comparatively speaking, overseas Chinese are very fortunate that they can access all information."

The volunteer at the Service Center for Quitting the CCP told him how to count up the number of people quitting the CCP. Most people who have quit the CCP and its affiliated organizations are from mainland China. Their desire of withdrawing from the CCP is transmitted after breaking through the Internet blockade, or they ask tourists to take their name lists of those quitting the CCP abroad. The volunteer told the overseas Chinese person some simple and easy methods of breaking through the Internet blockade and introduced him an editorial series, entitled, "Disintegrating the Culture of the Communist Party." The Finish Chinese man said that he was going to tell his friends about the information.

When she was interviewed by the media, Ms. Tula from Sweden told the reporter, "These show that Chinese people are so sick of the CCP that they are unwilling to follow the CCP again, and they want to lead a life with freedom."

With deep feelings and excitement, a woman from Romania said, "What you are doing now is wonderful. You should have all countries know how cruel the Communist Party is. People living in Sweden and some other democratic countries in the West do not know the Communist Party and sufferings of people who are ruled by it. You should have more countries know how China is ruled by the CCP so that we can help Chinese people better."

Although it was snowing and the wind was blowing, there were still many people who stopped and looked on. A great many people learned further the serious persecution of human rights in China.

“Recalling Master's Compassion: A Free Ticket to Attend His Lectures”