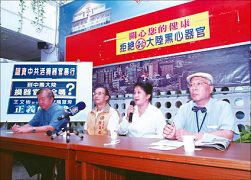 After the press conference, City Council member Chen Ying-tsai proposed a motion in City Council to condemn the CCP atrocity of organ harvesting from living Falun Gong practitioners. The motion was passed unanimously. All health facilities are required to follow up with all organ transplant cases in Mainland China and spread and follow regulations. This was the thirteenth county or city in Taiwan to pass a resolution condemning the CCP atrocity.

Mr. Chen said repeatedly at the press conference that live organ harvesting had not only harmed Falun Gong practitioners, but also challenged morality and human dignity. He called for everyone to bravely step out to help stop the evil crimes.

Dr. Wang said that the CCP harvests organs from living Falun Gong practitioners, and openly sells organs on the Internet. Organs including corneas to internal organs are clearly priced. There must be a large organ bank to supply the urgent needs of organs around the world. Human dignity should be respected and morality should be followed. Dr. Wang called for all media to expose the crimes and leave no hiding place for the perpetrators.

Deputy director of Kaohsiung Health Department Tsai Lung-chu was previously a surgeon. He said that to prevent damage from organ transplants in Mainland China, health care entities should urge related government entities to follow up with the Taiwanese patients who received organ transplants in Mainland China, evaluate the cases carefully and provide guiding information from both health and human rights perspectives.

Director of Kao-Suan Hospital Chen Yung-hsing said that organ transplants from involuntary donors seriously violates ethics of humanity and morality, no matter if it was from the executed or from living people. Both should be banned. He sincerely wished that the Taiwanese would see clearly these crimes perpetrated under the name of medical treatment. He called for all governments, human rights organizations, legal entities and media to pay attention to the cruel persecution of Falun Gong and to help stop the inhuman atrocities.