On October 28, 2006, more than 2,000 Falun Gong practitioners from Southern Taiwan held a parade in the city of Kaohsiung to clarify the truth about Falun Gong and support the 15 million withdrawals from the Chinese Communist Party (CCP). 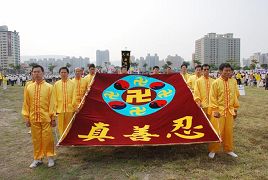 Banner with the characters "Truthfulness-Compassion-Forbearance" 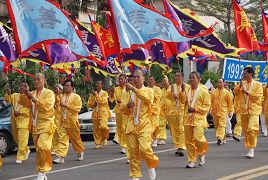 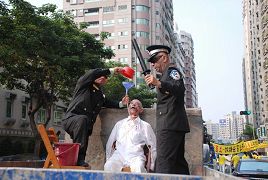 Reenactments of the persecution against Falun Gong 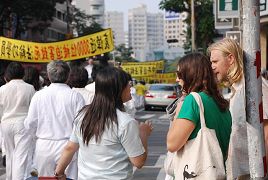 People are shocked by the CCP brutality

Practitioners reenacted the tortures that the CCP uses on Falun Gong practitioners in China, including the organ harvesting. Many people were shocked by the reenactments. Practitioners clarified the truth to them, and they all condemned the brutality of the CCP.

After the torture reenactments, there was the demonstration of the exercises. The gentle movements and beautiful music showcased the beauty of Falun Dafa.

A group of practitioners held banners which read, "Heaven Will Eliminate the CCP." After them, there was a group of Western drum players.

The parade, like a golden dragon, brought beauty, justice and truth to the people of Kaohsiung.