(Clearwisdom.net) In the early morning on Oct. 4, 2006, former Canadian Secretary of State David Kilgour and international human rights attorney David Matas gave a talk and answered questions about their investigative report on organ harvesting from living Falun Gong practitioners by the Chinese Communist Party (CCP) to a group of reporters, politicians, experts and scholars at the Newsmaker Breakfast at the National Press Club of Canada. 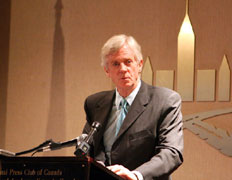 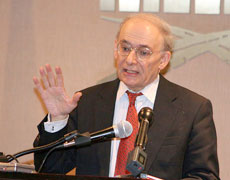 Kilgour (left) and Matas (right) talk about their investigative report on organ harvesting from living Falun Gong practitioners by the CCP at the Newsmaker Breakfast.

Mr. Matas said that the investigation didn't follow the conventional method. The typical way for human rights organizations to prove a violation is to find two independent witnesses. Each one's testimony should verify the other's. Mr. Matas said that the special nature of organ harvesting made it impossible to prove it using that conventional method. The surgeries were done behind closed doors, and you could only find the offenders or the victims. The victims died and their bodies were cremated, and it was impossible to track down the autopsy doctors. The offenders are unlikely to confess to murder, and the operating rooms were cleaned up. It was said that the records were destroyed as well, and even if they did still exist, it would be impossible to obtain.

Mr. Matas said that the difficulty of this investigation was one of the reasons that he and Mr. Kilgour undertook it. Conventional human rights organizations were unlikely to make such investigation, so they had to come up with their own methodology. By assessing eighteen elements of proof or disproof, the two investigators drew their conclusion.

Mr. Matas said that more evidence has been discovered since the publication of the initial report, and currently 26-27 methods of determination have been found. Mr. Matas assured the audience that the conclusion remained the same.

Mr. Kilgour told the audience that he and Mr. Matas had gone to fifteen countries and areas to introduce their investigation report to government officials, non-governmental organizations, diplomats, medical experts, religious groups, media outlets and the public. The report has been translated into nine languages. Mr. Kilgour pointed out the fact that neither he or Mr. Matas have been paid to do this.

Kilgour said, "Four significant breakthroughs towards a global consensus on this issue have now occurred:

a) We understand that the government and Official Opposition in Australia have agreed to ask the government of China to permit an independent international investigation into the allegations.

b) At the EU-China summit in Helsinki in early September, we're informed that the Foreign Minister of the host country raised the matter with China's Foreign Minister. The latter was encouraged to be proactively open about the issue, which was described as attracting much attention among Europeans, and the government of China was invited to undertake an independent study into the allegations. Before the Summit, a strong resolution from the European Parliament about China's human rights record was passed.

c) In late September, at the new Human Rights Council second session in Geneva, I was permitted to speak at the plenary about organ seizures from Falun Gong prisoners in China. This occurred after the Special UN Rapporteur on Torture, Manfred Nowak, presented his report, which was critical of governments including the government of China. Nowak had earlier reported that Falun Gong practitioners made up the vast majority of torture victims in China, who experienced beatings, electric shocks, painful shackling of limbs, denial of medical treatment and medication and hard labour.

It's important here to stress that some Falun Gong practitioners who have managed to get out of China told David Matas and myself that they, without any charges or court proceeding, worked as unpaid workers in " re-education" camps for up to sixteen hours daily in unhygienic and brutal conditions, making chop sticks, shoes, garments and various promotional items for foreign companies, all for export markets.

d) Last Friday, four of us presented evidence in Washington to the Subcommittee on Oversight and Investigations of the House of Representatives Committee on International Relations."

Mr. Kilgour and representatives of sixteen Amnesty International branches agree that the human rights condition in China is getting worse. This development is contrary to the Chinese government's promise to improve human rights when it applied to host the Olympic Games.