(Clearwisdom.net) On October 1, 2006, the Service Center for Quitting the Chinese Communist Party in Malaysia held a rally in a park in Kuala Lumpur to support 14 million withdrawals from the CCP. Chinese attendees condemned the CCP’s brutality. Falun Gong practitioners also attended the rally. 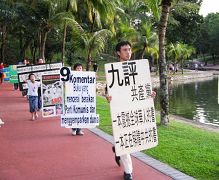 The rally was held at night. Organizers called upon more people to condemn the brutality of the CCP. Ms. Chen, a practitioner from Guangzhou, condemned the CCP’s harvesting organs from living Falun Gong practitioners.

Attendees held a parade in the park after the rally, which drew a lot of attention from the citizens.

“Frankfurt, Germany: Practitioners Protest the Persecution against Falun Gong in front of the Chinese Consulate (Photos)”