Southern Taiwan: Rally and Parade to Support Withdrawals from the CCP and Call for an End of the CCP's Live Organ Harvesting (Photos)

Global Service Center for Quitting the CCP and the Falun Dafa Association of Taiwan initiated a large scale rally and parade in Kaohsiung to support 15 million withdrawals from the CCP. It was to express the support from the Seven Counties and Cities of South Taiwan. People from all circles, including Falun Gong practitioners, celebrated the quitting CCP movement of near 15 million withdrawals and urgently called on the international community to stop the CCP's persecution of Falun Gong. Legislation Council member Li Kun-tse attended the rally and condemned the CCP's inhumane persecution of kind-hearted people. He pointed out that respecting life and safeguarding human rights apply to all races, colors, nationalities and gender. 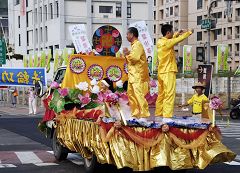 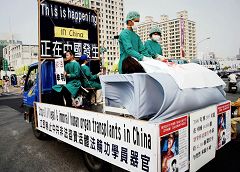 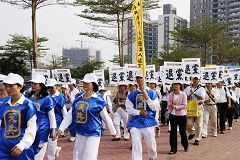 The parade was composed of several processions. The first was the procession to show Falun Dafa's widespread across the world, followed by reenactments exposing the CCP's brutal persecution and atrocities of live organ removal for profit. The next procession was people from all circles supporting human rights lawyer Gao Zhisheng, and Yuan Sheng who was almost arrested by the CCP for spreading information of quitting the CCP. The following procession was on spreading the Nine Commentaries on the Communist Party and promoting withdrawals from the CCP. The eye-catching posters and banners worded "Heaven destroys the CCP" caught the attention of many passers-by to stop and watch. Some people walked along with the parade and read the banners. Much of the public greeted to the practitioners, "You work hard. Keep going!" Some were shocked at the CCP's atrocities. Many passers-by took photos of the parade. 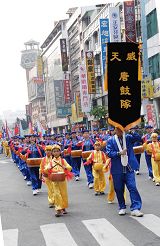 Ms. Li Fang from the South Service Center for Quitting the CCP said, "The Nine Commentaries on the Communist Party was published in November 2004. Since then, the unprecedented movement of renouncing the CCP and related organizations began. Because people know the CCP's evil nature and the fact that Jiang Zemin and CCP persecute Falun Gong, I believe that more people will renounce the CCP."

Since July 1999, the CCP regime has brutally persecuted Falun Gong. Facing persecution and slander, Falun Gong practitioners persist in peaceful truth-clarification and exposing the persecution. Mr. Cheng from the Taiwan Falun Dafa Association called on media to give a wide and fair report on the issue to let the public know the facts. A resident said indignantly after watching the reenactment of the CCP's live organ removal, "CCP's atrocities of live organ harvesting are too inhumane."

“The Epoch Times: Medical Researcher Tells of Her Experience Being Brainwashed”