(Clearwisdom.net) In Glasgow University, there is a very active Amnesty International student society. Its members are from different faculties in the university. These young students are full of righteousness; they firmly support all kinds of activities which support human rights. 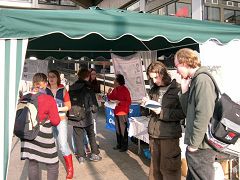 With the help from Amnesty International, Falun Gong practitioners were able to expose the persecution and gather signatures for a petition in Glasgow University

All students were listening wholehearted from the beginning till the end; they would not miss a single detail. During the seminar, practitioners answered each question raised by the students. Afterwards, the students decided to apply a campus campaign to the university, under the name of Amnesty International student society, in respect of the live organ harvesting of Falun Gong practitioners by the CCP. Some students said that they heard in a media report about how the CCP took organs from prisoners; some said that they have heard about the persecution of Falun Gong in various ways; some people had a heavy or solemn expression on their face, as they could not believe that such a ruthless thing exists in China, a country which appears to be flourishing.

Falun Gong practitioners brought various leaflets to the students. They also told them that practitioners spent their own money to buy this material; they want to let more people know this persecution in China. They hoped that when these students finished reading them, they could pass them to their family members, friends and their tutors in the university, etc. As there is one more person who gets to know the truth, it adds strength to morality and justice.

The activity was fixed on October 16; practitioners did a lot of preparatory work before it: practitioners from other areas posted banners which were made within a short period of time; many newspaper clippings regarding live organ harvesting were also sent to local practitioners; hundreds of e-mails were sent to the tutors of those main faculties in the university. Students from Amnesty International society also helped to deliver hundreds of letters to the main departments' offices in person.

On the day of the campaign, it was not allowed to put up banners on the railing due to the university regulations, therefore Falun Gong practitioners set up a simple tent to hang the pictures which exposed the torture of Falun Gong practitioners. Practitioners also brought two big suitcases and hung a big banner with the words "Appealing for the investigation into all the CCP concentration camps." The pictures and banners delivered a clear message to the passers-by: please help to stop this intolerable, cruel genocide in China.

The students from Amnesty International Society utilized their free time to join the activity and distributed the fliers and discussed the persecution of Falun Gong together with practitioners to the passers-by. After learning the truth about the persecution, several law students took an open letter written by the Chinese human rights lawyers Gao Zhisheng to the Chinese leaders regarding the torture of Falun Gong, the Nine Commentaries on the Communist Party, DVDs and newspaper clippings about live organ harvesting from Falun Gong practitioners. They told practitioners that they would show this material to their tutors. A few medical students expressed their intention to bring the materials to their fellow students and lecturers as well. Students from the Politics department also took some materials and said that they would watch the Nine Commentaries on the Communist Party DVD carefully to understand the true history of China. There were also a few Chinese students who took away some leaflets. One of them asked about the April 25, 1999 incident where Falun Gong practitioners appealed peacefully outside the main offices of the CCP. After learning the truth, he took the Nine Commentaries on the Communist Party and other material and left satisfied.

The site of the activity was in front of the student union. During the breaks, many students and tutors from the surrounding buildings came to the canteen and the restroom in the student union. The practitioners distributed the fliers continuously, and hoped that people who took the material would spread the information about the persecution of the innocent Falun Gong practitioners by the CCP to other people.

“Germany: Introducing Falun Dafa and Exposing the Persecution to the People of Münster (Photos)”