Aachen is located in the western part of Germany, and has a population of only 250,000. It has a common boundary with Holland and Belgium and is the center of Europe. It was founded by Kaiser Karl der Groe eight or nine centuries ago, so it is called the "Second Rome," and Aachen Cathedral is a popular tourist attraction. Aachen Industrial University established a friendly relationship with China's Qinghua University and Beijing Scientific and Technical University in the early 80's. Therefore, every year thousands of Chinese overseas students and exchange scholars study there. 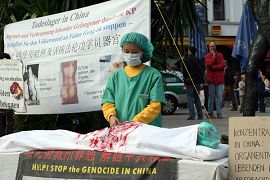 It was a warm and sunny day. Among crowds of pedestrians, tourists and shoppers, Falun Gong practitioners set up a reenactment to expose the CCP harvesting of organs from living people. The reenactment included a surgery table and a mock-up of a cage used to torture Falun Gong practitioners in Chinese prisons. Large numbers of people stopped to watch. People came one after another, taking leaflets and signing a petition form to be sent to German Prime Minister Merkel to condemn the CCP. 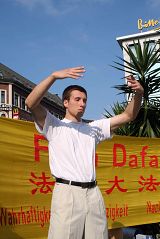 Practitioners demonstrated the Falun Gong exercises and displayed pictures depicting the history of Falun Gong. Taiwanese Falun Gong practitioners who had learned about this activity sent Aachen practitioners nearly 2000 paper lotus flowers along with bookmarks with the message "Falun Dafa is good" and "The world needs Truthfulness, Compassion, Tolerance" which were spread all over Aachen city.

“With True Belief in Master and the Fa, One Will Not Be "Reformed"”