San Francisco, California: Practitioners from Around the World Hold Grand Parade and Call on People to Help Stop the Persecution (Photos)

(Clearwisdom.net) On October 21, 2006, more than one thousand Falun Gong practitioners from across the world held a grand parade in San Francisco to demonstrate the grace of Falun Dafa and Chinese traditional culture, expose the Chinese Communist Party's (CCP) brutal persecution of Falun Gong practitioners, spread the Nine Commentaries on the Communist Party and promote the ongoing withdrawals from the CCP. They also called on the international community to help stop the CCP's persecution and killing. 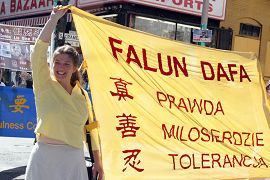 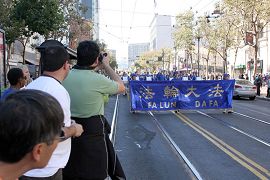 The practitioners' procession passes through Chinatown

The parade started from the square in front of City Hall, passed through the downtown shopping center and Chinatown, and spanned over a dozen blocks. The entire parade route was 2.2 miles long. Three police officers led the parade and several police vehicles followed at the end of the parade. The parade ended at Garden Corner Square.

The procession was led by the Divine Land Marching Band. The great music of the band could be heard far and wide. Coordinator Zhan Qing said that the band was organized in April of this year and had already participated in several large community events. The band played "Falun Dafa is Good," and other compositions.

Following the band was a beautifully decorated float, Chinese traditional dancing and a martial arts performance. Next, was an introduction of the wide spread of Falun Dafa, followed by the CCP's persecution of Falun Gong and practitioners' anti-persecution procession. The Falun Gong exercises were demonstrated on a float. Many spectators followed along with the exercise demonstration. One man said, "Wonderful!" while imitating the exercises.

Falun Gong was introduced to the public in 1992 and has spread to over 80 countries and regions. Countless practitioners have benefited from the practice. However, since July 1999, the CCP has persecuted Falun Gong brutally. During the past seven years, practitioners have persisted in peaceful clarification of the facts and exposure of the CCP's persecution.

Falun Gong spokesperson Xuerong Zhang said, "Over the past seven years, Falun Gong practitioners have persisted in a peaceful and rational manner to clarify the truth and awaken people's conscience. Now, Chinese people are renouncing the CCP. The CCP advocates violence, but never thought that a group of kind-hearted people could survive for as long as seven years under extreme persecution. Falun Gong has spread to more and more countries in the world. The founder of Falun Gong once said, 'Never in history has someone who persecuted those with upright faiths ever succeeded.' (Coercion Cannot Change People's Hearts, 2001). Our continuous efforts against the seven-year-long persecution demonstrate that righteousness will prevail. We hope that Chinese people of conscience and the international community will work together to stop the persecution of Falun Gong."

After the parade, a rally was held on Garden Corner Square. A "Quit the CCP" rally organized by the Global Service Center for Quitting the CCP was held at 2:00 p.m. on the square, to support the 14 million withdrawals from the CCP and its affiliated organizations.

The practitioners' parade touched the local residents, especially Chinese people. Many spectators wanted to know more about this magnificent parade. Some walked alongside the parade and read the banners.

A local Chinese family watched the parade with delighted expressions and said, "Wonderful, the performance is wonderful!"

Ms. Ding is a Chinese-American. She said, "I feel so happy to see Falun Gong's parade for the first time. I was shocked to read the news that the CCP harvests organs from living Falun Gong practitioners in China. Nobody, religious groups or any other group, should suffer such atrocities."

Several western spectators praised the parade, saying, "Wonderful, very nice," and greeted the practitioners with the thumbs up sign.