(Clearwisdom.net) On October 21, 2006, the third Senior Citizens' Sports Meet was held in Taipei. The Falun Dafa Association of Taiwan was invited to participate at the games and was awarded a certificate of appreciation. 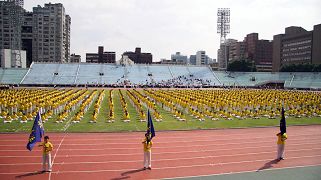 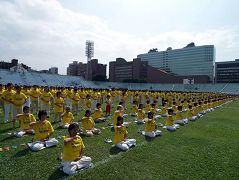 The Falun Gong exercise demonstration by more than 1,400 practitioners was the next to last activity of the sports meet. It was the biggest group at the games.

It was a sunny day with little wind. At the beginning of the games, the New Tang Flag and Drum Team performed. The powerful and magnificent performance won warm applause. The practitioners’ exercise demonstration was scheduled as the next to last group performance on the program. They waited peacefully under the strong sunshine.

More than 1,400 practitioners participated in the performance. In the front row were practitioners holding blue flags with the words, "Falun Dafa." Their orderly and magnificent performance under graceful music immersed everyone in a peaceful atmosphere.

Before the performance, a practitioner introduced Falun Dafa to the guests at the meet, and talked about its wide spread to over 80 countries. The practitioner explained that hundreds of millions of practitioners in all circles of society have benefited from the practice. They cultivate the principle of Truth-Compassion-Forbearance in their daily life.

However, the Chinese Communist Party (CCP) slanders and frames Falun Gong. The CCP persecutes Falun Gong practitioners, harvests the organs from living practitioners, and sell the organs at a high price to patients who need organ transplants. Such an act is condemned by people of conscience. More and more human rights groups are making statements calling for an end to the persecution.

Among the invited guests at the sports meet were the Deputy Mayor of Taipei City, City Council members, members of the Legislative Council and officials from various government departments. After listening to the practitioners’ introduction, they understood the facts of the persecution in China and felt indignant that such a peaceful practice is persecuted.

Mr. Jao, a director of the Track and Field Committee, said that he was touched by the Falun Gong practitioners’ performance. "Though they were was the last on the program, the practitioners lined up at a little over 7:00 a.m. in good order under the strong sunshine. Some are seniors and some are young children. They all waited for their performance without complaining. I admire Falun Gong."

Besides the exercise demonstration, booths were set up around the stadium to promote Dafa. Many people requested Falun Gong introductory fliers and expressed their interest in learning the practice.

In Taiwan, everyone can practice Falun Gong freely and benefit from the practice. In mainland China, the CCP has brutally persecuted Falun Gong for the last seven years. But across the world, more and more people are learning Falun Gong, which can benefit individuals and the whole society. The world needs Truth-Compassion-Forbearance.

“San Francisco, California: Practitioners from Around the World Hold Grand Parade and Call on People to Help Stop the Persecution (Photos)”