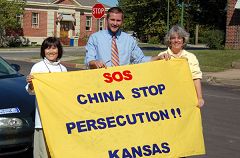 A city manager holds a banner with two practitioners 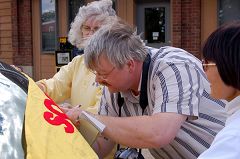 At every stop, the practitioners first visited the local city hall, requesting support from the elected officials for the car tour and asking them to take actions to stop the persecution. They also gave the local media information packages about the persecution and told them in detail about the Chinese Communist regime's atrocities of harvesting organs from living practitioners. They also visited a local library to donate Falun Dafa literature and a DVD of the NTDTV 2006 Chinese New Year Gala.

Several newspapers, four radio stations and a TV station interviewed practitioners. A total of eight newspapers reported on the car tour. Additionally, the mayors of four cities decided to issue proclamations in honor of the car tour.

After listening to a news report about the car tour on the radio, a city councilman reported what he had heard to everyone on the city council and requested his mayor to issue a proclamation to the practitioners. Many people were shocked upon learning about the organ harvesting atrocities and they all signed the practitioners' petition without hesitation.

After the car tour reached a successful conclusion, Kansas practitioners had an experience sharing meeting in which they reviewed issues raised during the tour. For example, they will dress more formally when they visit city halls, and will contact media several days beforehand so that they have more time to arrange a meeting.

The car tour allowed practitioners to realize that people are eagerly waiting to hear the truth of Falun Dafa. While the car tour brought the beauty of Dafa to many people, the participants will continue their efforts in the coming days.

“Rabbi Reuven Bulka: The West Should Stage a Wholesale Boycott Against the Beijing Olympics (Photo)”