(Clearwisdom.net) The Southern US Falun Dafa Cultivation Experience Sharing Conference was held on October 15, 2006, from 9:00 a.m. to 5:00 p.m. at the Institute of Chinese Culture in Houston, Texas. Practitioners from Austin, Dallas, San Antonio, and Houston gathered together to share their cultivation experiences. 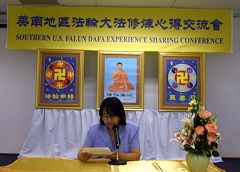 Sixteen practitioners made speeches at the conference. Ms. Zeng from Houston said in her speech, "It has been ten years since Master came to the United States to spread the Fa, and I have also practiced for ten years. At that time, I knew Falun Dafa was great. After walking through all the trials and tribulations on the path of cultivation, my determination in cultivation has become stronger and stronger. During cultivation practice, I understand that Fa-study is so important, but the interference is also very great. After I read fellow practitioners' articles published on Minghui/Clearwisdom introducing their experiences of reciting the Fa, I started reciting myself. It was very difficult the first time, but now I have recited [the book Zhuan Falun] once and have started a second time. It is not so difficult this time. I recite whenever I have time. Since 2004, I have gone to the Chinese Consulate to clarify the truth. At that time, there were interferences from my work and family, but I kept on studying the Fa. I have walked through the tribulations and will walk steadily on the last leg of the journey."

Mr. Gou from Dallas said in that when they had a comparatively big project for validating Dafa in their local area this year, all the practitioners got together to share their understandings and discuss it. They understood it based on Fa principles. While working in the project, everybody made full use of their capabilities, and at the same time, looked within when there were conflicts, forming a whole body. The mighty power of the Fa manifest itself as the whole body.

One person practices cultivation, the whole family benefits. Falun Gong practitioner Ms. Tan shared one story about her family. One day, her five-year-old son fell off the sofa and landed on a piece of glass. He passed through the glass, and left crushed pieces of glass all over the floor, but her son was safe and sound and safe. Another practitioner, Mr. Huai, talked about his family. Before his wife and he practiced Falun Gong, they had many illnesses. One month after starting to practice they no longer needed to take medicines. However, due to the pressure from the Chinese Communist Party (CCP), he changed to another cultivation method, and his illnesses relapsed, and he grew polyps in his nostrils. This was a painful lesson for him. Later, he resumed his cultivation practice in Dafa, and now he does his best to do well in distribution work in the media that practitioners set up for truth clarification. He also used various means to clarify the truth to people from Mainland China and advise them to withdraw from the CCP and its affiliated organizations.

Practitioner Ms. Peng shared the tribulations she encountered in her family. Prior to 1999, when the persecution of Falun Gong started, her whole family were Falun Gong practitioners. After the CCP started the persecution of Falun Gong in 1999, believing that Falun Dafa is the righteous Fa, she stepped forward to validate the Fa. But her husband started creating interferences for her cultivation. She persisted in righteous thoughts and righteous action, overcame various difficulties, and walked through the tribulations in her family.

Other practitioners also shared how to use various ways to clarify the truth, particularly clarifying the truth to Chinese people; how to do well in working in the media to do truth clarification; and how to do well in other Fa-validation projects.

The Houston Minghui School has operated for three years. Each weekend, young practitioners get together to study the Fa and read Hong Yin. Now, from Monday to Friday, parents and children read Zhuan Falun together. During the Fa conference, young practitioners recited poems from Hong Yin. Everyone gave them warm applause of encouragement.

The Fa conference successfully concluded at 5:00 p.m. Many practitioners commented that cultivation experience sharing is a good opportunity for everybody to mutually encourage each other, advance diligently together, and make improvements together.

“Washington, DC: The Historical Documentary Shake the World, Based on a Falun Gong Practitioner's Story, Shakes the Audience (Image)”