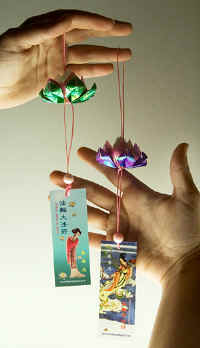 Every morning she is there. Standing or sitting on the West Mall, always silent and still. We walk by and look past, or maybe wonder, "Who is this woman, and what is she doing out so early?"

Her name is Lillian and she is practicing the art of Falun Gong, a meditation that emphasizes mind and body integration.

Li Hongzhi introduced Falun Gong in May 1992 in Changchun City, China. [Mr. Li] lectured in more than 54 major Chinese cities and by 1999, there were more than 100 million practitioners in China alone. He brought Falun Gong to America during a visit to Houston in 1996, where it quickly took root and began to grow in the West as well.

Falun Gong is rooted in ancient Chinese culture. Followers practice meditation, a series of slow exercises and focus on the core principles of truth, benevolence and forbearance. These seem like noble goals, and followers of the practice attest to numerous health benefits and greater inner peace. Falun Gong publications call the practice "the most remarkable system for the improvement of body, mind and spirit" and claim that the practice is neither religious nor political.

On July 20, 1999, China's Chairman Jiang Zemin ordered a nationwide persecution of Falun Gong practitioners. Neither side of the conflict makes clear exactly what provoked the action, but Falun Gong adherents have their theories.

"The Chinese Communist party has only about 60 or 70 million members, and many of those are leaving," said Hwang. "Falun Gong has over 100 million followers, so Jiang Zemin got jealous."

Though many have dismissed Falun Gong's claims of persecution as exaggerated, the world can no longer deny the reality of the situation. On July 6, respected Canadian scholars David Matas and David Kilgour released a report investigating allegations that the Chinese government has a policy of harvesting organs from live, detained Falun Gong practitioners. Though the secrecy of the Communist government makes it nearly impossible to prove conclusively whether or not organ harvesting from prisoners actually occurs, the authors provide evidence that, in their own words, is "verifiable and, in most cases, incontestable."

One undeniable fact is that China has an official policy of arresting, detaining and persecuting Falun Gong practitioners. Lillian, the woman on the West Mall, can speak for this reality firsthand.

Lillian, who declined to give her last name for privacy reasons, began practicing Falun Gong 10 years ago this month. She credits her practice with improved health and mental peace.

"I had health problems since I was a youth," said Lillian. "I had had to quit my job, I couldn't work. Since practicing Falun Gong, everything has been wonderful."

Falun Gong has undeniably brought her hardships as well. She, like many other practitioners in China, was arrested and detained for her practice.

"The police used torture," Lillian said. "The cell had a bar grate, and they handcuffed my hands over the back of the horizontal bar above my shoulders and held me there for 72 hours continuously."

After the completion of her one month sentence, Lillian was allowed to leave the detention center, but she was never really free and was constantly subjected to surveillance by the government and police. She was arrested again in 2001, imprisoned for another month, then taken to a rehabilitation center.

"I lost my freedom completely," Lillian said of her time at the center. "Two staff [members] would take turns bathing me. I was never out of anyone's sight. I was forced to watch programs, read newspapers and watch media that slandered Falun Gong."

After her release, Lillian was subjected to constant physical monitoring in an intensely stressful situation. Her husband and 3-year-old son left her, and her family was in a constant state of worry. She was eventually able to come to the United States and settle in Austin, where she now resides happily and without fear of persecution.

"I feel very happy I can practice here freely," Lillian said. "I can wear the T-shirt to let more people know that Falun Gong is very good and to let people know about the persecution in China."

"The American media are afraid to report information on Falun Gong because of the influence of China's government," said Hwang, "but the Chinese people know deep down that the government is corrupt, and they are doing terrible things."

The media blackout is one reason there has been little response to allegations of torture, arrest and organ harvesting.

Falun Gong is beginning to receive a more official response, especially with regards to the organ harvesting issue. In April, the U.S. Congress Subcommittee on Africa, Global Human Rights and International Operations heard testimony of allegations of organ harvesting from Falun Gong prisoners. The subcommittee stressed the idea that the Chinese government should abolish the policy.

For now, the Austin Falun Gong organization and its members simply have to continue their practice toward self-improvement and their efforts to make the extent of the crisis known.

"We hope people come to see the truth [about the persecution]," said Hwang. "It is worse than the Nazis."

You can view the U.S. Congress Subcommittee's report on organ harvesting at http://investigation.go.saveinter.net. If you are interested in Falun Gong, you can join Lillian in daily meditation at 7 a.m. on the West Mall or find more information on the Austin Falun Gong Association's Web site, www.faluninfo.net.