(Clearwisdom.net) On June 8, 2006, Falun Dafa practitioners Ms. Jiang Jiayin and her sister Jiang Lanlan were arrested while going to work. The two women were arrested by Shangtang Village officials (in Liusha Town), policemen from Chengdong Station, and 610 Office members from Puning City, Guangdong Province. For a long period of time, there was no information about their location. Recently, their mother discovered that they were being detained at the Sanshui Labor Camp. The mother went to Sanshui Labor Camp and requested their release, but was turned away. 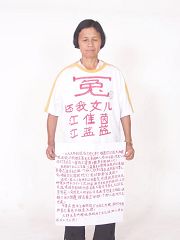 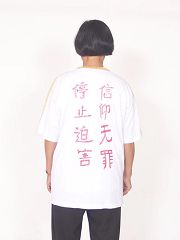 Ms. Jiang Jiayin, Ms. Jiang Lanlan, and Mr. Wu Xiyuan, practitioners in their fifties, were arrested and detained in a brainwashing session held in Sanshui Labor Camp for four months. Ms. Jiang's grandmother, who is 85 years old and paralyzed, cries every day because her family members were forced to leave home to avoid being arrested or detained.

On the morning of September 22, 2006, Ms. Jiang's mother and a member of Mr. Wu Xiyuan's family went to Sanshui Labor Camp to request the release of their relatives. Ms. Jiang's mother wore a T-shirt to the camp with these words written in large letters: "Wronged" and "Give me back my daughters Jiang Jiayin and Jiang Lanlan." On the back it said: "There is no crime in having a faith, stop the persecution."

When the guards saw that Ms. Jiang's mother was wearing a truth clarifying T-shirt and carrying a poster board, more than twenty guards were sent out to seize the board. The T-shirt was violently stripped off Ms. Jiang's mother by the guards. They then threatened her, "If you do this in any other place, you will be sentenced to several years in prison."

Mr. Wu Xiyuan's uncle recently passed away. His family needed him, but the camp administration refused to release him to attend the funeral.

“All Beings Are Watching Us”