Falun Dafa Practitioner Wang Shoushan Dies as a Result of Persecution by the 610 Office in Juxian, Shandong Province

Mr. Wang Shoushan, Falun Dafa practitioner from Juxian, Shandong province, was arrested by 610 Office personnel in Juxian on March 7, 2006. They kept him at the Juxian Detention Center, the Wangcun No. 2 Forced Labor Camp in Shandong, and the "Law Enforcement Center" (a brainwashing center) in Shandong and other places, where he had to perform forced labor and was subjected to brainwashing. Due to this persecution, Mr. Wang became seriously ill. He was diagnosed with liver cancer, and the Juxian 610 office released him in order to avoid responsibility. Mr. Wang passed away around September 6, 2006. 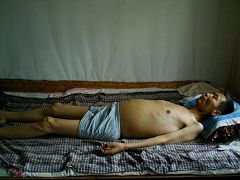 Mr. Wang Shoushan lying in bed and unable to care for himself after being released

Mr. Wang Shoushan, 58, was the chief doctor at the Chinese Medicine Department of the People's Branch in Juxian People's Hospital, Rizhao City, Shandong Province. Mr. Wang was illegally arrested at around 10 a.m. on March 7, 2006. At the time, he was at his workplace, and he was taken away by the Juxian 610 office leader Liu Yanping, a 610 officer whose last name is Zhao, and Wang Kuiyuan, chief of the Xiaodian County Police Station.

Liu Yanping forced Mr. Wang to take them to his home, where they confiscated his family's property. They even stopped a member of this family, Wei Yuqing, from entering the home. They searched Mr. Wang's home and confiscated most of his truth clarification materials about Falun Dafa. They also took a 21-inch color TV (worth more than 2600 yuan), a VCD player (700 yuan), and a tape recorder (75 yuan).

Mr. Wang Shoushan was arrested and taken to the Juxian Detention Center, where they detained him for 27 days. He was forced to work from 6 a.m. until 6 p.m. each day. He had to do jobs such as folding gloves, peeling onions, and cleaning peanuts. They did not give him enough food to eat during the entire time he worked there. In the morning they gave him two small buns with cold water. At noon they gave him only one bun with water and two buns in the evening with cold water.

On the morning of April 2, they sent Mr. Wang to the Wangcun Second Forced Labor Camp in Shandong for six days of "transformation" and brainwashing. Then they sent him to the Shandong "Law Education Center" for more torture and brainwashing sessions.

Constant hunger and heavy forced labor, plus many days of brainwashing, severely harmed Mr. Wang's health, both physically and mentally. He became very ill. On April 11, he was sent to a hospital for an examination and was diagnosed with liver cancer. Shirking their responsibilities, the doctors at the hospital told Mr. Wang's employer to take him back on April 12. Mr. Wang was a very healthy man before they arrested him.

In order to cover up their crimes, the Juxian 610 Office gave Mr. Wang infusion treatments for two days, but his

condition worsened. The hospital administrator Pang Zunqiao then took Mr. Wang to the Juxian Center Hospital for medical tests, which then showed that he had a malignant tumor on the upper right lobe of his liver. Mr. Wang's family and everyone who knew him were shocked that a perfectly health man could be abused to the point of such serious illness within a span of a month.

In addition to the brainwashing sessions, the authorities also persecuted him financially. They required that he pay 3,000 yuan up front, and even forced his son to accompany him. Every day they were charged about 100 yuan. They charged him more than 1,300 Yuan for brainwashing him for eleven days.

On March 7, 2006, the Juxian 610 Office arrested a member of his family Wei Yuqing, who is also a Falun Dafa practitioner. They put her in the Juxian Detention Center for ten days, fined her 1,000 yuan, and forced her to pay daily expenses of 20 yuan. The detention center also forced them to pay for "study materials." A female Falun Dafa practitioner named Feng Zaifang, from Xiaodianzhen Jinduncun, was also illegally arrested as a part of the same "case." They detained her for fifteen days and fined her.

After they released Mr. Wang Shoushan, he returned home but never recovered. He suffered from swelling in the abdomen and could no longer take care of himself. He passed away around September 6, 2006.

On September 12, 2006, one week after Mr. Wang Shoushan died as a result of persecution, the Juxian 610 office arrested four more local Falun Dafa practitioners. The people at the 610 office tried to find out who sent the message about the persecution of Mr. Wang to the Minghui website. These four practitioners are Ms. Wang Shuping, about 60, a retired teacher; Ms. Feng Zaifang, in her 50s; Mr. Pang Xiangdong, in his 40s, and his wife, in her 40s. Mr. Pang's wife showed symptoms of a serious illness and they released her the same afternoon. The other three practitioners are detained at the Juxian Detention and brainwashing center, and are being tortured.

“In a Few Words: Selfishness is the Fundamental Omission”