(Clearwisdom.net) On September 26, supporters of Falun Gong and eight members of Parliament (MP) rallied at Canada's Parliament Hill to call on the Canadian government and public to take actions to stop the Chinese Communist regime's atrocities of harvesting organs from living Falun Gong practitioners. Former Secretary of State for Asian Pacific and senior MP David Kilgour gave a speech at the rally. A reporter interviewed Mr. Kilgour afterward. 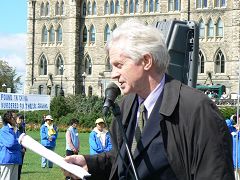 Reporter: You recently have visited many countries including the U.S., several European countries, and Australia, as well as the UN. Can you tell us your experiences on this trip?

Kilgour: My trip was to ...Kestle...in Australia, New Zealand and Europe, the Nordic countries. We are going to Congress in the United States on Friday. So we have been received everywhere well. I guess the most encouraging thing would be that at the European Union summit with China, the matter of organ harvesting was raised by the foreign minister of the host country Finland with the foreign minister of China.

And on very authority he told them that Europeans were very concerned about what is being alleged. The Europeans want an independent investigation. And I didn't hear the response of the foreign minister of China but at least 530 million Europeans through their summit have raised this issue with the government of China and they can't ignore that. They might be able to ignore Canada but they can't ignore hundreds of millions of Europeans.

Similarly at the United Nations summit last week in Geneva, I guess you heard I got 2 minutes to give a little summary of our report. And evidently the delegation from China took 45 minutes to try to ask for more time. And when they did get 3 minutes they had nothing to say. I am sure you can get it, the record is available.

The pressure is building and if enough people send enough emails and have enough rallies like this today, the government of China will decide I hope very soon that it is going to lose and its games are going to lose.

Reporter: What is your next plan?

We are going to Washington Friday to testify for a committee, a subcommittee in congress, a committee on human rights. We are going to talk about our report and what we have seen and heard and learned traveling around the world. We are going to, I will be mentioning as I mentioned earlier this anecdote in Boston this summer, when a surgeon from Tianjin basically admitted to a doctor from Germany that the organs were coming from Falun Gong practitioners. He did that by saying when asked where the organs were coming from, he said go ask the Falun Gong practitioners demonstrating outside this hotel. That is about as clear an admission by a surgeon in China as to where he is getting the organs, the livers in this case, that it is ever going to happen.

Reporter: You know recently lawyer Gao Zhisheng has been arrested and he is not even released right now, and you know the foreign media agency news is blocked by the CCP regime. Do you have any comments?

And if they can lock up Gao Zhisheng and I gather they have policemen in his home who won't let his wife and children go outside the home. What kind of universe does the government of China think they are living in?

Do they think that people in Canada or America or Europe or Asia will stand for treating perhaps their most noble member of the legal profession. Treating him like a dog?

There are rumors that he is being tortured, and if that is the case then I would think that the prospects for China's Olympic games are getting less and less clear. The world will not stand for treating Falun Gong the way they are being treated and they won't stand for the way they are treating Mr. Gao and they had better release him unharmed quickly, or a lot of us are going to say the last place on earth we will be in the summer of 2008 is in Beijing for the Olympic games.

Reporter: Do you think that the government around the world is going to pay attention to this point?

Kilgour: I think they are. I think we have had a very encouraging response in Australia, New Zealand, in Belgium, in Sweden, in Finland, in France. It has been quite encouraging. I think we are getting a good response. Now the question is we have to turn that into action and governments the world over have to start insisting that something be done immediately, mainly that the horrible practice stops immediately.

Reporter: Do you think that the Canadian government will take some action?

And I believe that Mr. Harper's government has asked for an investigation to be done. You don't have to investigate very far to find that it has been established. Which I think by our report it has been happening.

I am hoping that Mr. Harper, who by the way is seems to be very concerned about human rights in China, will take a tough stand on this. Nobody in Canada can believe that our exports to China are going to be affected if we stand up on an issue like this.

Surely there are some things that are more important than trade with a government that by the way we have a 12 billion dollar trade deficit with China. Anyone who thinks Harper's government won't stand up on this issue I think is mistaken. I certainly remain optimistic that the Harper government is pushing this issue.

Reporter: Do you think that Harper's government can change the foreign aide policy to mainland China?

Kilgour: Well yes, why should China be getting I think it is 40 to 50 million dollars in taxpayers' money in aide program given what is going on?

The OECD has been raising the issue over the years that Canada should not be giving aide to China and if anything we have to make sure that every dollar of aide that goes from Canada to China doesn't get wasted, frittered away, doesn't go into something that allows the government of China to spend more money on doing hideous thing like organ harvesting against Falun Gong practitioners or persecuting the Falun Gong.

So I think we have to have some new thinking on the part of CIDA and the government of Canada with respect to that aide. If indeed we are to continue to give aide to China.

Reporter: It seems that the human rights dialogue between governments doesn't work quite right, what might you suggest?

Not raised once a year at this so-called human rights dialogue, which is a charade and has been pronounced a charade by former ambassador Charles Burton. So yes it is. We have to become very much more realistic about how we deal with China.

Reporter: Thank you very much.

Kilgour: You are welcome.