On September 28, Canadian Minister of Foreign Affairs Peter Mckay harshly criticized China over human rights and democracy. As reported by the BBC, this was one of the bluntest comments that the Conservative party made since it won a federal election in January. According to Reuters, when asked what Canada would do about the aid it gives to China to develop democratic institutions, MacKay replied: "That is something we are reexamining but I would suggest that there is still a contribution Canada can make on that front." 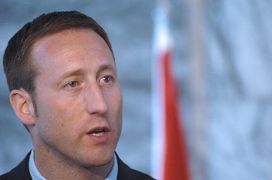 On September 26, at a rally to expose the Chinese Communist regime's atrocities of harvesting organs from living Falun Gong practitioners, Chairman of Organ Donation Committee of the Kidney Foundation for Eastern Ontario Reuven Bulka called on the public not wait to take action to help stop these atrocities. During the rally, eight Canadian Members of Parliament attended the rally and spoke out. They called on the Canadian government and people to act together to end this crime.

Shortly after an independent investigative report was published by former Secretary of State for Asia-Pacific David Kilgour and human rights lawyer David Matas, the Canadian government publicly stated that it will investigate the organ harvesting case. On July 13, chairman of the Conservative caucus Mr. Jaffer suggested that the Canadian government should cooperate with other countries, including the U.S. and European countries, who are willing to stop this crime, to form an international union to exert pressure on the CCP, urging it to open the gates so that people can learn the truth. Mr. Jaffer said that not only should the Canadian government take action, but we also should cooperate with other governments to solve this issue by the law, and bring it to the relevant international court.