On New Year's Day 2006, Falun Gong practitioners in Rome headed for the Thai Embassy to peacefully protest and submit an open letter demanding justice and calling on the Thai government to resist the Chinese Communist Party's (CCP) exportation of persecution. 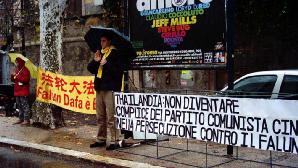 The protest concerned recent events in Thailand: On December 10, 2005, practitioners in Thailand protested peacefully across from the Chinese Embassy calling attention to policeman He Xuejian's raping of two women practitioners in China. Thai police were seen entering and coming out of the Chinese Embassy several times. Dozens of police officers and plainclothes police then came across the street, searched practitioners' handbags forcefully, wrote down their ID numbers, brutally manhandled the practitioners and ripped their banners, leading to physical pain and the loss of their personal belongings. On December 15, Thai police, again under the instigation of the Chinese Embassy, without cause arrested eight practitioners protesting across from the embassy. As of this time, five practitioners are still being detained. After the incident, practitioners worldwide protested in front of local Thai Embassies and consulates to demand that the Thai authorities immediately release the practitioners being unlawfully detained. Practitioners condemned the CCP's exportation of persecution to Thailand and warned the related officials in the Thai Government not to collaborate with the CCP, which hurts their own and their nation's future.