Taiwan: Depicting a Story of Courage in a Minghui School Drawing Class (Photos)

Recently, Mingui School in Taipei took the Minghui article "A Little Girl in Front of a Police Car" (http://www.clearwisdom.net/emh/articles/2004/1/3/43757.html) as the topic of the month for their drawing classes. The schoolteachers hope that this assignment can provide an opportunity for young practitioners outside of China to protest the brutal persecution which has torn numerous families apart and orphaned many innocent children.

"A Little Girl in Front of a Police Car" tells a real story about a little who appealed for Falun Dafa at Tiananmen Square. Another practitioner made a trip to Tiananmen Square, Beijing, to appeal for Falun Gong and protest the persecution. He was arrested and thrown into a police car. When the car was about to leave, he witnessed a brave little practitioner's courageous and righteous deeds. Though the story is rather simple with only a brief dialogue, it has touched countless hearts.

The Art teachers decided to have the class draw in multiple frames to depict the whole story. They asked the students to use watercolor pens or colored pencils with sharp tips so that the children could put more details in each frame. That meant that each student had to draw a few frames on one piece of paper, although they used to draw only one. It was quite a challenge to the younger students. The teachers also hoped the students could share their experiences after completion of the assignment. The goal of the assignment was to concentrate the individual tiny voices to send their strongest support for the persecuted Falun Gong children. 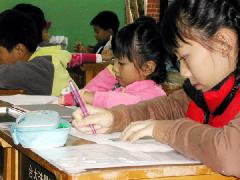 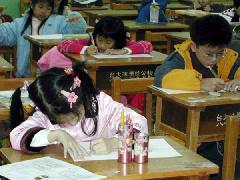 A student asked a teacher, "How long did it take the little girl in the story to arrive in Beijing by train? Where did she go after that?" The teacher estimated that the distance from the girl's hometown Qingdao to Jinan is nearly four hundreds kilometers, and then it is about five hundred kilometers from Jinan to Beijing. It is hard to imagine that the little girl of 8 or 9 years old made the trip on her own. 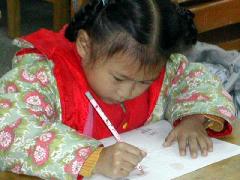 "Even if she took a non stop train, the one-way trip would be still almost eight hundred kilometers. If the little girl only had enough money for a non-AC slow train, then what strengthened her mind to go to Tiananmen Square to talk to those policemen after such an exhausting trip?" The teacher asked.

Some students in the class answered: "Because she wanted to rescue her mom and dad..." the teacher nodded and said, "Yes, she didn't know what to do other than go to the place where her parents were arrested to tell the police the truth of Falun Gong. In addition, she didn't know where her parents were and which police car or which policeman arrested her mom and dad. She went through countless tribulations and hardships and just wanted to tell the police one truthful and compassionate sentence: "... I came to Tiananmen Square just to tell my friends the police a few words: Falun Dafa is good!"

All students then asked: "Then what? Was she arrested...?" The teacher said: "The policemen were silent for the moment. However, where did the little girl go? Did she have any money to live? Was she going to go back home? Was her home sealed up? Were there any relatives who would take care of her? Was she able to take care of herself?... We don't know the answers to these questions, but if we don't do anything for them, hundreds, or even thousands of children like this little girl will disappear quietly"

This is a touching story about a little innocent girl with a righteous mind and righteous behavior. What she did brought warmth to those practitioners held in the police car and shocked the evil. Moreover, it touched all the people with conscience.

The lesson based on this story has concluded, but will the short episode that happened at Tiananmen Square permanently take root in the hearts of people? We truly hope the persecuted children can walk out of the nightmare soon, and have a happy and peaceful family life as well as the freedom of belief, like other children in the free world do.