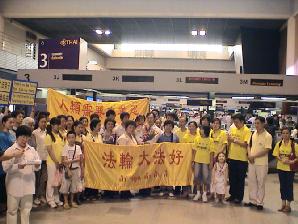 (Clearwisdom.net) At 4:00 p.m. on Jan. 15, 2006, in the waiting hall of the Bangkok International Airport in Thailand, Falun Gong practitioners held a farewell ceremony for Huang Guohua and his four-year-old daughter, Huang Ying, who would soon fly to New Zealand. Prior to this, Huang Guohua had been illegally detained at the Bangkok Immigration Detention Center for a month for protesting in front of Communist regime' embassy in Thailand over the Chinese police's acts of violence. Through Falun Gong practitioners' efforts and with help from the United Nations High Commission for Refugees (UNHCR) and the New Zealand government, Huang Guohua and his daughter were eventually freed to be resettled by the UNHCR in New Zealand. 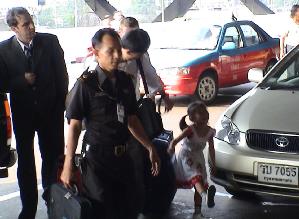 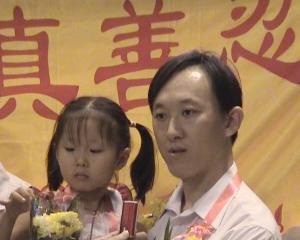 Huang Guohua said in his short speech, "I hope that the Thai government can stand on the side of righteousness and bravely release the four Falun Gong practitioners still detained. Thailand should repent of its unethical actions."

Falun Gong practitioners' representative Chen Hua said, "Today, I'm happy and sad. I'm happy because Huang Guohua and Kaixin (nickname of Huang Ying) will ultimately head for true freedom! I'm sad because they were escorted to the airport by the Thai Immigration police, and deported like criminals, which, by succumbing to the CCP and participating in the persecution of Falun Gong, has been a big disgrace for Thailand. Here I express my appreciation to New Zealand for embracing Falun Gong practitioners with her broad bosom."

Background of the incident