Mr. Liu Qiuxiang and Ms. Lin Xiuxia had together walked a difficult journey in life. How were they able to eventually leave those days of gloom, come out of the mire of pain and sickness, and fill their family with warmth, health and serenity? 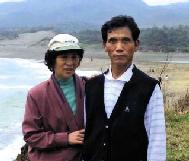 Freed from the darkness of sickness, Liu Qiuxiang (left) and Lin Xiuxia (right)

Mr. Liu Qiuxiang was born in 1945 in Gongliao Village of Taibei County. His father's health was poor since Mr. Liu was a child, and his family was in poverty. The entire family lived a harsh life in a far-removed mountain area. At that time, transportation was not available, so getting in and out was possible only by walking. The only transportation to far away places was the train, and a walk to the Gongliao Train Station took two hours.

Because his father was physically weak and ill and unable to do hard labor, Liu Qiuxiang and his older brother helped his mother farm and take care of the pigs every day. As a young child, he diligently worked to help with family chores daily. Because of his overly heavy workload, he had to frequently be away from his elementary school, so his education was spotty. He didn't have any friends, let alone a happy childhood.

When he was 18 years old, Mr. Liu caught the flu. Relying on medicine sent from a factory, he was barely able to overcome the sickness, and he continuously coughed for many months. Afterwards, his health did not improve, and the long-lasting cold symptoms and nasosinusitis continued to haunt him. He depended on the herbs he collected himself. Mr. Liu lived without hope and was afraid to imagine the future.

After being discharged from the military, Mr. Liu moved to Suao and started his own family. After his marriage his health continued to deteriorate, with sicknesses such as headaches, tinnitus, shoulder pains, sciatica, stomach pains, chest congestion, and many other symptoms. In one year he had four endoscopies and all sorts of tests, but the reason for his illness was never discovered. Doctor after doctor could not help him. Cold medicine, stomach medicine, painkillers, and many other medications needed to be taken after every single meal. The more kinds of medicine and the more doses he had to take, the more he suffered and worried. He could only depend on sleeping pills to survive through each and every long restless night. In the end, he became so drowsy that it was as if he was drunk each day.

Seeking Health, But Unable to find it

Because his body was stiff and rigid, at work Mr. Liu would frequently hurt his back if he was not careful. Plus, he had an accident when he was forty something years old that had caused him to lose muscle at a fast rate, and he could no longer walk. When she remembers the torment of those years, Ms. Lin, Mr. Liu's wife, says softly that, "At that time I weighed only 40 kilograms (88 pounds). I was riding a bike to carry my husband to Luodong to see the doctor. When I stopped the bike, because he could not stand up, we both fell to the ground in a pile." Ms. Lin accompanied Mr. Liu everywhere to seek well-known doctors but with little results. Even though later on, under the care of his uncle, Mr. Liu's condition improved a little, but his life of pills did not change.

Mr. Liu had to take many kinds of medicine to work everyday. Sometimes he would forget to take some of them, and even if he had already arrived at the factory, he still had to go back home to get them. The never-ending need for Chinese medicine, Western medicine, and health foods consumed Mr. Liu's salary completely. His strong wife did not complain at all, but took on the burden of taking care of the family, hoping that her husband would someday soon regain his health. But reality was not what they had hoped for. Mr. Liu's illnesses persisted, and the already weak Ms. Lin also started taking medicine everyday for long-term exhaustion.

Cultivating Both Body and Mind, Obtaining a New Life

Ms. Lin bravely faced the difficult situation and continued her job as service personnel at the Xuao Rongmin Hospital. Very fortunately, she had the chance to witness a military veteran's experience of regaining his health from practicing Falun Gong. On June 28, 2001, she started learning Falun Gong as well, and half a year later, Mr. Liu also started practicing. The couple was able to obtain a new life.

The couple went every morning to Suao Middle School to practice the five exercises, and when they had time, they diligently studied Zhuan Falun and understood many of the principles. They learned that Falun Dafa cultivates both the mind and the body. Besides doing exercises that transform the body, one must also cultivate his or her heart and place importance on being kind. The couple diligently improved themselves and used the Fa as a guideline to how to treat others. They used a benevolent heart to view everything, trying hard to assimilate to the universal characteristics of "Truthfulness, Compassion, Forbearance."

As they were upgrading their xinxing, all of their misfortunes took a positive, major turn. After practicing the Fa for three months, one day after dinner, Mr. Liu suddenly felt very sleepy and slept on the sofa chair without even taking any medicine. The next day he woke up feeling very refreshed and never had to take medicine again. From then on he was released from his nightmarish life of not being able to survive without medicine.

Mr. Liu said, "I could not read many words before, but now I can read the entire Zhuan Falun. Before I cultivated, because I always got carsick, I never traveled at all. Now I frequently take trips abroad. Before, I was very afraid of being cold, and when I walked I had no energy. Now I go up and down so easily in the factory that even the young workers cannot compare with me. Before I practiced Dafa, there were many things that I couldn't eat; now everything tastes so good." He smiles and says, "Only after cultivating Falun Gong did I realize that life could be lived with such ease."

Ms. Lin tells us with smiles, "After cultivating Falun Dafa, I understood the relationship between loss and gain, and gave up a lot of bad attachments. I have an open heart now, and I seek less and am much happier. I don't see the need to worry about things anymore and taking care of the family has become easier and smoother. Now I do not need to take any medicine at all. Also, before I frequently had cold sweats, but the cold, moist skin I used to have is now smooth. Everyone says that our faces look much healthier, so bright and younger looking." Seeing their content smiles, my heart also felt a sense of ease.