Falun Dafa practitioner Hu Qingjun is being severely persecuted at the Jixi Labor Camp in Heilongjiang Province. Recently, after Hu Qingjun's situation was made public, Dafa practitioners worldwide have been making phone calls to the following individuals in efforts to persuade them further wrongdoing: Qi Min, the commander of the team persecuting Falun Gong, Feng Chenglin, the chief officer of Dahengshan Police Station of Hengshan District, and various persons responsible for persecuting Falun Gong in the Hengshan District Public Department. The staff in the Jixi Labor Camp hypocritically told Hu's family that they would tend to his health, yet Hu Qingjun has been repeatedly tortured, even though he is extremely weak.

The labor camp had been unsuccessful in its efforts to extort money from Hu's family. Thus, they tried various ways to get him into custody, traumatizing Hu's wife, Wang Jinxia, Hu Licheng, his son, and Hu Min, his daughter. His son's behavior and academic record at school are both exceptional, yet the constant pressure from society and the school authorities made him refrain from attending school twice in one month. At the moment, he has gone back to school again. Hu's daughter, normally an outgoing person, is currently in a state of depression. These mental wounds to the family are all being caused by the Hengshan District Public Security Department in Jixi City illegally carrying out orders from above. 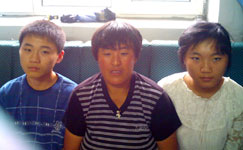 Here, we urge all the Falun Dafa practitioners to join in sending their righteous thoughts to strengthen Hu Qingjun to help him leave the evil's den as early as possible. We appeal to the kind-hearted people and people of conscience to lend a hand in stopping the persecution of Hu Qingjun. Ask for his unconditional release and an immediate reunion with his family.

The following are the phone numbers of the responsible agencies and personnel: