Torture Methods in the Fuxin and Huludao Labor Camps

In mid-May of 2001, the Fuxin Labor Camp doctor force-fed Lu Hongwei. Half a dozen inmates pinned Lu onto a metal bed, pinched his nose, and emptied a bucket of highly concentrated salt water into his mouth. The water flooded into Lu's lungs, causing him to suffocate. The prison doctor, however, ordered inmates to stuff a mop into Lu's mouth to prevent him from catching a breath. Lu lost consciousness due to suffocation. He was then hung upside down, and a large amount of salt water flowed out of his mouth. In one day, Lu lost consciousness twice.

After Lu was sent back to the cell, he suffered lung inflammation and vomited large amounts of yellow pus. On the brink of death, Lu was carried to the Second Division main office, where half a dozen officers shocked him with 4 electric batons. Two high-voltage batons were tightly pressed against his temples. Another was used to beat his head, and the last one was used beat him all over the body. Lu passed out several times during the torture. (Picture 1, Picture 2) 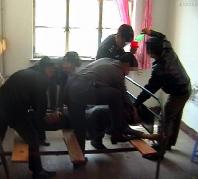 On July 11, police transferred Lu Hongwei, who had barely recovered, to the Huludao Labor Camp and put him solitary confinement. In October, Lu went on a hunger strike to protest against the illegal imprisonment. On the fourth day of his hunger strike, the deputy Prison Chief Yao Chuang, the prison doctor Wang Dazhu, an official named Tong from the Department of Education, and seven guards beat Lu with six electric batons. Wang Dazhu brutally broke Lu's left kneecap, deformed his face, and caused his mouth to blister from the electric shocks. During Lu's hunger strike, Wang Dazhu has also ordered inmates to shackle Lu's limbs onto a bed in a star shape. Wang also remove the lower part of the bed frame, leaving behind only a 10 cm-wide wooden plank below Lu's head, back, and feet. Lu was hung in this manner for 34 days; his excrement dropped around the bed. Wang Dahu also poured hard liquor and beer into Lu's stomach through a force-feeding tube and claimed that, "The prison director told me to give you alcohol, because Falun Gong practitioners don't drink," Practitioners Zhang Xuan and Wang Hongting sustained similar persecution. The skin on their bodies and faces was charred by electric shocks. 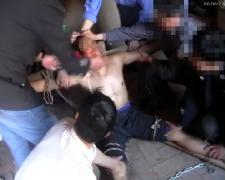 In 2003, the Chaoyang County police brutally interrogated Lu, causing him to bleed profusely. The next day, the deputy chief of the detention center Hao Naifeng tortured Lu for a long time with electric batons. During the force feeding, Hao used bamboo sticks to pry open Lu's mouth and inserted a thumb-wide plastic tube into Lu's throat. Hao repeatedly pulled the hard tube in and out for several hours. Additionally, Hao used a special torture instrument that pins Lu onto a wooden plank. (Picture 4)

The photographs above demonstrate a few of the torture methods used by Longcheng police in persecuting Falun Dafa practitioners. Main perpetrators in the persecution include Police Division Section Leader Huang Dianxiang, Han Yasheng, and Sun Xudong. These criminals usually carry out brutal interrogations in the night. Over the years, their hands have been awash with practitioners' blood. Practitioner Yu Xiuling died in the hands of Huang Diansheng.

Huang Dianxiang is now the head of the National Security Team in the Chaoyang City Police Department: 86-421-2614849 (Office)

Guards in this center regularly torture imprisoned practitioners. The resident doctor Xu Sheng also participates in the persecution. The photographs below demonstrate the torture methods used there to persecute practitioners during force-feeding.