According to a report from AFP on September 27, US astronomers said they had found a vast, mature galaxy using NASA's Spitzer and Hubble Space Telescopes.

They were particularly impressed by the fact that stars seemed to have been formed in the galaxy. 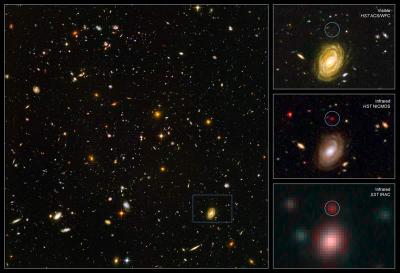 "This is truly a significant object," says Richard Ellis, of the California Institute of Technology and a member of the discovery team.

"Although we are looking back to when the universe was only six percent of its present age, this galaxy has already built up a mass in stars eight times that of the Milky Way."

He said the fact such a galaxy had already completed its star formation "implies a yet earlier period of intense activity."

"It's like crossing the ocean and meeting a lone seagull, a forerunner of land ahead. There is now every reason to search beyond this object for the cosmic dawn when the first such systems switched on," he said.

Bahram Mobasher of the Space Telescope Science Institute, leader of the science team, said that the galaxy initially looked "young and small, like other known galaxies at similar distances."

"Instead, we found evidence that it is remarkably mature and much more massive. This is the surprising discovery," he said.

Though astronomers generally believe most galaxies were built up by mergers of smaller galaxies, the new discovery suggests that at least a few galaxies formed quickly and wholly long ago. For such a large galaxy, this would have been a vastly explosive star birth event.

The findings were due to be published in the December 20, 2005, issue of the Astrophysical Journal.

“We Must Be Diligent in Our Final Steps of Cultivation”