Ms. Li Weixun Arrives in Baltimore With Help from the UNHCR and the U.S. Government

Falun Gong practitioner Ms. Li Weixun from Shenyang City, Liaoning Province obtained United Nations refugee status in Thailand. With assistance and support from the Friends of Falun Gong Organization in the U.S., the U.S. State Department, U.S. Congress and some NGOs, she received approval from the Office of the UN High Commissioner for Refugees (UNHCR), to stay in the U.S., and she safely arrived at the Baltimore International Airport at midnight on September 21, 2005. 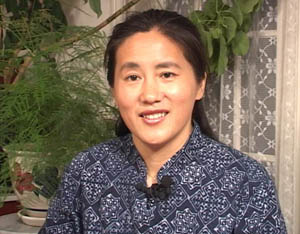 Her Experience of Brutal Persecution by the Chinese Communist Party

Li Weixun was savagely tortured by the CCP police in early January 2002 for persevering in her practice of Falun Gong. She could not move her arms or legs, and she could not talk or eat. When she was on the brink of death, the perpetrators reluctantly approved medical parole through the Shenyang City 610 Office, and they sent her to the No. 1 Hospital Affiliated with China Medical University for emergency treatment, only after strong repeated requests from her family and friends. During her stay at the hospital, four police officers watched her around the clock. She successfully escaped the monitoring and left China, and she obtained UN refugee status in Thailand. After she went through some procedures and waited for a while, the UNHCR and the Friends of Falun Gong organization sought and obtained support from the U.S. government on her behalf, and Li Weixun received permission to live in the U.S.

According to Li Weixun, she and her husband both worked for the CCP Committee of a large factory in Shenyang City. To defame her and attack her cultivation practice, the CCP Committee slandered Falun Gong through a loudspeaker that resonated throughout the factory, which hurt her and her family. The police constantly harassed her and frightened her mother-in-law, who became nervous whenever someone knocked on the door. During her illegal detention, she was tortured to the brink of death. The police were afraid to take responsibility for this, so they agreed to release her on medical parole. Later she went home on an outpatient basis. The police stayed at her home next to her room and they asked to break open the room through the dividing wall so they could watch her at all times. Her family members, who do not practice Falun Gong, could not take it anymore and said to the police, "We know you are doing this to keep your job, otherwise we would have kicked you out and you would have to sleep in the street." Her family, friends and other Falun Gong practitioners risked their lives and helped her escape from home to go to another country. The people who helped her were severely persecuted; some of her family members who are not Falun Gong practitioners were sentenced to eight years in prison and are currently being incarcerated.

Li Weixun's hometown of Shenyang City is under the jurisdiction of Bo Xilai, the governor of Liaoning Province. Li Weixun was one of the plaintiffs who filed a lawsuit in the U.S. against Bo Xilai during his visit there, because his actions have resulted in the severe persecution of Falun Gong practitioners in that region.

She is Grateful for Help from People in the U.S.

On the morning of September 23, 2005, some Falun Gong practitioners in the U.S. accompanied Li Weixun to attend training and service programs for refugees provided by the Office of Refugee Resettlement. Li Weixun thanked the people for their help and support. Ms. Sala thanked Falun Gong practitioners for their help with Li Weixun's release. The officials informed the trainees that the U.S. government accepted some international refugees who do not have family members or friends in the U.S., and Li Weixun is one of them.

In the afternoon, Li Weixun visited the U.S. State Department and expressed her sincere gratitude for the help that the U.S. government has extended to her and other Falun Gong practitioners. She also told three veteran officials the State Department about the unreasonable persecution she suffered in China for practicing Falun Gong.

The State Department officials thanked Li Weixun for her visit and said they would continue to pay attention to the persecution of Falun Gong by the CCP, and they will bring up the topic during future meetings with Chinese officials, and they will urge the Chinese government to respect Falun Gong practitioners and other Chinese people's freedom of belief and freedom of speech.

It was people who loved freedom of belief that created the tradition of the U.S.' emphasis on democracy, freedom, and human rights--the country's founding principles. As the government upholds and maintains justice and order in the world under the banner of justice and morality, America has prospered and flourished.