Teaching the Fa at the Conference in Switzerland Published

An English translation of Teaching the Fa at the Conference in Switzerland has been released, and is available online at http://falundafa.org/book/eng/switzerland1998.htm. This supercedes the draft translations that may have been circulated before. 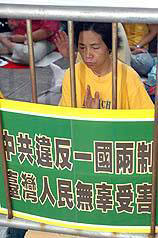 Human rights lawyers are preparing to ask for United Nations intervention to stop the alleged persecution of Falun Gong practitioners in the mainland.

[Practitioners] of the controversial [spiritual] group claim they have suffered at the hands of mainland authorities ever since they were outlawed in 1999.