Dafa practitioner Mr. Hu Qingjun from Heilongjiang Province has been illegally detained at the Jixi City Forced Labor Camp for more than three months. Every day, he is forced to perform 12 hours of slave labor. On the third day, he fainted in a brick factory and had pain and pressure in his chest and angina pectoris, among other symptoms. His family asked the police to release him immediately. The labor camp guards said they needed to send him for a physical examination before they made a decision. Then the labor camp delayed the examination until August 31, 20 days later. 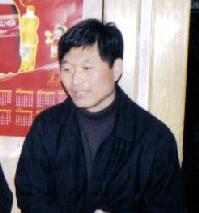 On August 31, 2005 at 7:30 a.m., Mr. Hu Qingjun's wife Wang Jinxia, and some relatives and friends went to the labor camp to send Mr. Hu to the hospital. They saw a taxi parked in the courtyard of the labor camp. Zhang Guohua, a guard at the forced labor camp told Wang Jinxia, "Go and find another taxi". Wang said, "I don't have enough money." Zhang Guohua threatened her, "If you don't have money, then we won't go to the hospital."

Originally it had been agreed that Mr. Hu would be sent to the City Hospital for a physical examination, but the driver drove to the Railroad Hospital instead. Upon arrival, Zhang Guohua threatened Wang Jinxia again, "Let's settle this before we go into the hospital. If you still say you don't have money, we'll take another taxi and go back now."

Zhang Guohua also confiscated Wang Jinxia's cell phone. Wang asked, "Why did you take my cell phone?" Zhang Guohua lied and said that it was his responsibility.

Before the internal medical examination, Police officer Xu told the doctor that Mr. Hu is a Falun Gong practitioner and then gave the doctor a document listing details of the examination. The doctor followed the list as instructed. Mr. Hu was still handcuffed while the doctor tested Mr. Hu's blood. It was not until the doctor scolded the police that the handcuffs were removed.

Hu Qingjun displayed symptoms of pain and pressure in his chest and angina pectoris. According to Hu, when his chest hurts, he can hardly breathe or move. It is difficult to sleep normally.

The doctor's diagnosis for Hu was myocarditis, chest expansion and neurotic disorder.

The labor camp repeatedly forced Hu Qingjun's family to pay the expenses on their own during the examination. Finally, Hu's family was forced to pay 160 yuan for the taxi and physical examination.

On September 2nd, Hu Qingjun's wife made a phone call to Qi Min, the squadron team leader of the labor camp, to inquire about the possibility of releasing Mr. Hu on bail for medical treatment. Qi Min said, "There's no need to discuss it. The examination result showed that he is normal, everything is normal."

As of now, Hu Qingjun remains in detention at the forced labor camp and is suffering from brutal torture.

Everything that Jixi City Forced Labor Camp has done with respect to Hu Qingjun's physical examination has been illegal.