On September 10, 2005, the annual Sports and Culture Expo was held at Gymnase Pierre de Coubertin in Montgeron, near Paris. 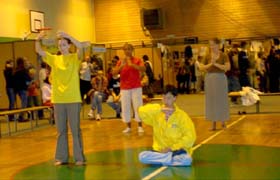 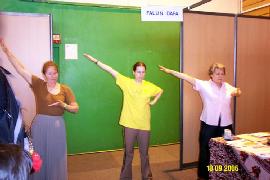 Ville de Montgeron is located southeast of Paris. The aim of the Expo is to encourage the healthy development of mind and body. The organizer allocated time slots for all groups to perform at the center of the stadium, including music, gymnastics, dance, martial arts and traditional cultivation ways. This was the foruth year that the French Falun Gong practitioners attended this Expo. They were invited to perform a Falun Gong exercise demonstration. 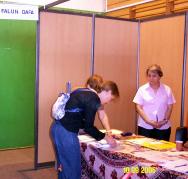 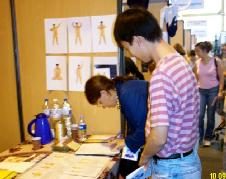 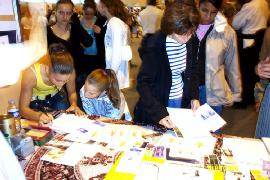 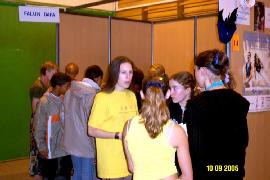 Many people came to practitioners' booth to learn the fact, ask for truth-clarification literature and sign their names to support the effort against the persecution

People were also drawn by the Falun Gong exercise demonstration near the booth. When they learned that Falun Gong instruction is free of charge, they were pleasantly surprised and very happy to see that in today's world of materialism, there still exists such a pure, righteous and selfless cultivation group.

Practitioners gave the children visitors bookmarks and postcards with pictures of children of different nationalities practicing Falun Gong, and informed them about the brutal persecution of Falun Gong in China. In fact, even children at a very young age could understand the facts. Some children, after learning the truth of Falun Gong, immediately talked to their friends and signed the petition form with their pure and innocent hearts.

“Russia: Practitioners in Moscow Hold an Anti-Torture Exhibition Condemning the Persecution of Falun Gong by the Chinese Communist Party (Photos)”

“A Section Director of a Provincial Police Department Said, "The 610 Office Should Be Dissolved."”