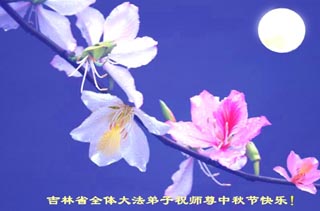 Falun Dafa Practitioners from Changchun City Wish Great Master a Happy Mid-Autumn Festival! Master, Disciples from Your Hometown Miss You So Much!

(Clearwisdom.net) During the UN World Summit held in New York, Falun Gong practitioners held a series of large-scale activities to call on people from all walks of life to help stop the persecution of Falun Gong taking place in China. One of the prominent activities was a 24-hour vigil outside the Waldorf-Astoria Hotel where Hu Jintao was staying.

(Clearwisdom.net) On the morning of September 16, 2005, Hu Jintao left New York for Vancouver. At a little after 9 a.m., the Chinese motorcade came out of the Waldorf-Astoria Hotel. Someone said that Hu Jintao left with the motorcade, but the Falun Gong practitioners appealing in New York during the last few days did not leave. At 10:40 a.m., several cars of the Chinese delegation came out the south entrance of the hotel. At the same time, Hu Jintao's motorcade, consisting of about 4 cars, came out the north entrance of the hotel. Practitioners holding banners on the sidewalk spoke out loudly together, "Falun Dafa is Great", "Stop the Persecution of Falun Gong", "Bring to Justice Jiang Zemin, Luo Gan, Liu Jing, and Zhou Yongkang", "Bring to Justice Ruthless Police and Others Who Persecute Falun Gong", and "Hu Jintao, the Time That Heaven and the People Give to You Is Limited".