(Clearwisdom.net) Prior to Chinese President Hu Jintao's visit to the United States, the human rights situation in China became the center of world focus again. At 7:30 p.m. on September 10, the non-profit organization, "Global Mission to Rescue Persecuted Falun Gong Practitioners" hosted a benefit concert at Eisemann Center in the City of Richardson, Texas (near Dallas), calling for help to rescue orphans of persecuted Falun Gong practitioners in China. 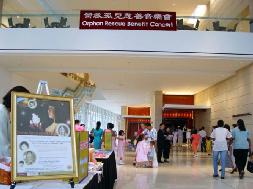 Mrs. Wu, a representative of "Global Rescue," said that the purpose of the concert was to help more people know about the desperate situation of the orphans, and to raise funds to rescue these children to the free world. They plan to help those orphans who don't have a reliable living situation in China to come to the United States and give them a secure home life and help them receive a regular education. 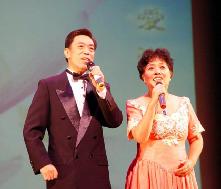 Many well known Chinese and Western artists performed at the concert. The performances included dance, solo singing, duet singing, a cello solo, and an orchestra. Before the intermission, a short video program produced by FGM TV about rescuing Falun Gong orphans was shown. The video program helped the audience see the pain that the Falun Gong practitioners' children have experienced during the six-year-long persecution.

The audience was very moved and many people were in tears when they saw how the children are suffering. After the concert, many people made donations to support the rescue effort. 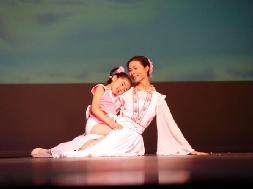 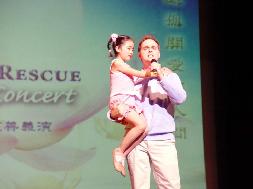 Dance: "Calling for Conscience," "Give Children a Dream," and "Childhood"

The concert also showed the audience another aspect of the Chinese Communist Party (CCP). A student from the University of Texas at Dallas, Mr. Cale Dingman, told reporters that the performances were very good and moving. Through the concert, he learned that good people are suffering in China and saw the evil nature of the Communist Party.

The concert was prepared in a short time. Many practitioners provided their support by going to local Chinese groceries and shopping centers to clarify the truth and raise awareness about the benefit concert.

A Chinese man told a practitioner at the concert that his friend visited China recently and said that China was now very good and urged him to visit China too. He said he knows that China is beautiful, but he knows that that is not because of the Communist Party. He said he knew what the CCP was. It looks fine on the surface but carries out a lot of persecution under the table and stirred up hatred toward Falun Gong. Another elderly gentleman said that many people know of the CCP's lies.

A bank clerk was very sympathetic and supportive of Falun Gong. She bought ten tickets to give to her friends and relatives.

A westerner watched the concert and asked for truth-clarification materials from a practitioner and said he would mail them to a relative in California. Another westerner told a practitioner that he had been in China for two months and saw how the Chinese police arrested people. He absolutely believed that the persecution of Falun Gong is indeed taking place but he still doesn't understand why the Communist Party wants to persecute Falun Gong but not other exercises such as Tai Qi. A practitioner told him that Falun Gong is not just for improving health but also has a guiding belief in "Truth, Compassion, Forbearance." However, the Communist Party doesn't allow people to have any beliefs other than in the CCP. The man then understood.

Some people received the flyer about the concert but weren't able to attend, so they donated some money to support the rescue project. Others were interested in Falun Gong and began to learn the exercises at a practice site nearby.

A middle-aged woman said she did research about AIDS in Southeast Asia and had visited Thailand and Yuanan Dali in China. She discovered that trust between people is hard to find in big cities, no matter whether it's in China or America. She lamented the fact that society was deteriorating.

This woman said she tried to talk about the "June 4 Tiananmen Massacre" to her young guide in China but the reaction from the guide made her realize how much the Communist Party has tried to cover up their history. When a practitioner introduced the brutal persecution of Falun Gong in China, she said she believed that the CCP's persecution was very cruel and that the party had covered up the truth. She asked a practitioner what she could do when she goes to China again. The practitioner told her to consider her own safety first, but that she can let the Chinese people around her know about what she has learned about Falun Gong. When she was leaving, the woman said that if everyone practiced Falun Gong, the world would become better.