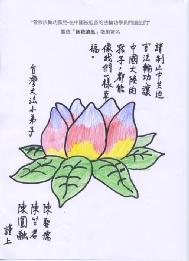 A drawing of a lotus flower, dedicated to children under persecution

The first stop in the signature collection campaign was Meijin Kindergarten. The young director of the kindergarten, Mr. Shi, graduated from a university in the United States. Falun Gong practitioners told him that many Falun Gong practitioners in Mainland China had been illegally detained and tortured just for practicing Falun Gong. Almost 3,000 practitioners have died from the persecution. Many children have lost their parents and were forced to leave their homes. After learning about the persecution, Mr. Shi made arrangements for the signature collection activity and helped with videotaping it. He said, "I hope the Chinese government will respect human rights, stop persecuting its people, give [Falun Gong] practitioners freedom and spread the benefit of Falun Gong to every corner of China."

The second stop in the signature collection activity was Hongyu Kindergarten. Most of the children there had learned about Falun Gong before. They know that "Truthfulness-Compassion-Forbearance" is good. One little girl kept crying after watching the video about the persecution. She asked why policemen would beat practitioners and throw them into jails. She couldn't understand. Many children shared this question. The kindergarten director and teachers helped us explain what was happening in China. All the children signed their names or drew pictures to be sent to President Bush.

This activity gave us an opportunity to meet many kind adults and children and to hear their sincere call to help the children under persecution. Let's hold hands together, young and old alike, and support the rescue of the orphans of persecuted Falun Gong practitioners. We hope the day will come soon when they can live happy lives like other children in the free world.