On the sloped lawn just opposite where Hu's motorcade stopped, Falun Gong practitioners held three big banners, reading, "Hu Jintao, the time given to you by God and the people is limited," "The Fa rectifies the human world," and a large photo depicting brutal tortures. Practitioners standing in front of the CCP officials saw many people gaze at these eye-catching banners. They hoped that Hu himself would not miss them, either.

Practitioners also clarified the truth to tourists around them, telling them about the persecution happening in China, and their purpose for coming to the waterfall. The practitioners also explained to the tourists how the CCP organized a "welcoming team" to put on a false show of peace and prosperity and cover up its crimes of murdering and violating people's human rights. Many people understood. When practitioners asked, "Do our banners block your field of vision?" They replied, "Lift them higher." 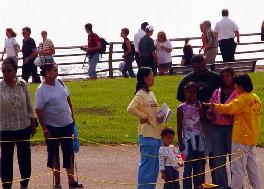 Tourists are curious and ask practitioners about Falun Gong

A reporter from the Washington Post interviewed practitioners on the spot. One of the questions the reporter asked was, "The persecution was initiated by former leader Jiang. What do you think of the present leader, Hu Jintao?" A practitioner replied, "Hu Jintao has been in office for over three years, and the inhumane persecution is still going on, so he cannot avoid responsibility. We hope that through this visit, Hu can truly learn the truth, make a right choice, and stop the persecution."

“New York: Prior to the United Nations World Summit, Falun Gong Practitioners Appeal for an End to the Persecution (Photos)”