New York: Prior to the United Nations World Summit, Falun Gong Practitioners Appeal for an End to the Persecution (Photos)

(Clearwisdom.net) On September 12, 2005, as the UN World Summit that will mark the 60th anniversary of the United Nations was about to convene, Falun Gong practitioners gathered in front of the UN headquarters in New York to call upon leaders from all countries and the public to show concern over the brutal persecution of Falun Gong that is taking place in China. They also cautioned the Chinese leader Hu Jintao, who is about to come to New York to attend the UN Summit, not to continue following Jiang Zemin's persecution policies, but to immediately end the persecution of Falun Gong and release all illegally imprisoned Falun Gong practitioners.

Persecution is still going on 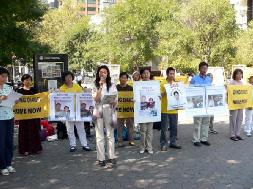 Ms. Yeong-ching Foo's fiancé, American citizen Charles Li was arrested on January 22, 2003 at Guangzhou Airport. He was then sentenced to three years in prison. The reason for his arrest was simply because he practices Falun Gong and wanted to expose the CCP's persecution of Falun Gong to the Chinese people. In nearly three years of prison life, Charles Li has been subjected to beatings, being force-fed, being forced to do slave labor for a long period of time, and being forced to watch videos slandering Falun Gong. 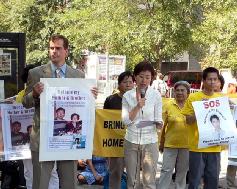 American citizen Liang Xiaofeng lives in Hong Kong. Her mother Yuan Yuju and her elder brother Liang Jinghui were arrested on July 19, 2005 from their family's computer shop in Luzhou City, Sichuan Province. The reason for their arrest was that they practice Falun Gong. On August 17, Yuan Yuju was charged for selling MP3 players with Falun Gong music at the computer shop and distributing Falun Gong flyers. She was sentenced to one year of forced labor and is being detained at Zizhong City's Nanmusi Women's Forced Labor Camp in Sichuan Province. Liang Jinghui is being detained at Luzhou City Detention Center. The police will not allow the lawyer his family hired to intervene, and refuse to let family members visit him.

Appeal for people's concern and an end to the persecution

Overseas Falun Gong practitioners' family members in China are suffering persecution. This is only a small example of the brutal persecution happening in China. In the past six more years, tens of thousands of Falun Gong practitioners in China have been sentenced to forced labor, sentenced to prison, forced to receive brainwashing and forced to become homeless. Nearly 3,000 practitioners are verified to have died as a result of the persecution. All this has been covered up by the CCP's lies and propaganda and information blockade.

Ms. Yeong-ching Foo stated that, but for the appeal of overseas Falun Gong practitioners, and the support and concern from the American people and people from all over the world, she dared not imagine what Charles Li's situation would be like. Charles Li, an American citizen, was sentenced to a lengthy prison terms by the CCP for his belief. Freedom of belief is the foundation for the establishment of the U.S; we should not allow the CCP to go on committing such crimes of trampling upon human rights. As Charles Li is still in prison, we should keep up our efforts until Charles and tens of thousands other Falun Gong practitioners obtain their freedom.

At the press conference, practitioners also read a letter to President Bush from U.S. Congressman Chris Smith. The letter requests that President Bush raise the topic of China's human rights, including the persecution of Falun Gong, when he meets with Hu Jintao.