A Psychiatrist Tells of his Cultivation Practice (Photo)

I am a psychiatrist, employed at the Taipei City Psychiatric Center. I would like to share my experiences of the past several years with you. 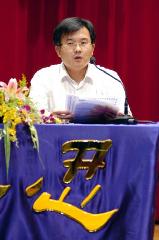 I obtained the Fa just like many people. Initially, I just wanted to cure my illnesses. I am 45 years old. I suffered from many ailments ever since I was in my 20s, such as insomnia, soreness, stiffness of the neck and shoulders, and back pains. As I'm a doctor, I naturally treated myself with modern medical remedies. I consulted with the orthopedist and neurologist and went into physical therapy. No matter whether I took drugs, got injections, used hot compresses, or did stretching exercises, the symptoms disappeared only temporarily. I couldn't find a cure. For my insomnia, I took sleeping pills, with increasing dosages daily. Sometimes in the middle of the night, I tossed and turned in bed and thought to myself, "I am only in my 20s and these chronic illnesses are incurable. They are hidden deep within my bones. When will I find relief?"

I have worked in the medical field for a long time and know that modern medicine, though seemingly well developed, is not the cure-all. Many chronic illnesses (or as Teacher calls them in Zhuan Falun - "Hospitals call all of them 'modern diseases',") have no known causes. At that time I turned to the so-called "alternative treatments," and qigong. There were many people in our country claiming they could use qigong to heal illnesses. There were so many, it was amazing. I didn't know which one to go to.

When I was thinking about qigong, the Chinese Communist Party (CCP) began its defamation and suppression of Falun Gong. I heard about the peaceful appeal at the State Council Appeals Office near Zhongnanhai and the staged Tiananmen self-immolation. I was confused! Why would the CCP-sanctioned media spread rumors to defame Falun Gong? At the same time I admired the staunch and unyielding spirit of the practitioners in China. Later on I read a magazine that reported on Falun Gong in a feature article. This article really triggered my curiosity. I wondered what kind of qigong it was? I inquired about the 9-day Falun Gong introductory workshop and its location. On November 1, 2001, I finally attended the 9-day "Fa" study and exercise workshop on Jiaxing Street. I truly thank Teacher for allowing me to find this great law of the universe, which has not been revealed to humankind for the past tens of thousands of years. Since then, I began my cultivation path to return to my true self.

After the 9-day workshop, I was deeply touched and moved by Teacher's immense Fa principles. I felt certain that the true meaning of life, which I had been searching for all my life, was given to us by Teacher through Falun Dafa. From the first day that I was able to think and learn, my mind was filled with questions about the purpose and the meaning of life. I wondered about the size of the universe, I wanted to know if there is a boundary. I asked myself if there were life forms on other planets. All these were interesting questions, which lacked an answer. Teacher explained profound theories in simple language, and solved questions I had always asked in my mind, questions which I thought would never be answered.

How could I not share these precious principles with my family members? My wife thought that qigong was used only for healing and fitness. She felt that since she wasn't ill, there was no need to practice qigong. After she attended the 9-day workshop, however, her heart opened towards the practice and she studied the Fa and did the exercises more diligently than I.

It was just like what Teacher said in the article, "Solid Cultivation" in Hong Yin, "Study the Fa and obtain the Fa, Share in learning and share in cultivating." We studied the Fa and did the exercises together. After a while we read Teacher's poem, "The Difficult Path to Godhood," and "Predestined relationships spanning endless lifetimes, Each connected by the thread of Dafa." We felt so fortunate. We could be together as husband and wife in this life and cultivate together. This opportunity came because Teacher arranged us to obtain the Fa together. We joined a study group, went to a park to do the exercises and studied the Fa with fellow practitioners. I was deeply touched by the compassionate and peaceful spirit emanating from every practitioner. I couldn't believe that in this material society, where morality has deteriorated to such an extent, there still existed a group of people with high morals and selflessness. Being among them really makes me feel what Teacher said, "The Buddha-light illuminates everywhere and rectifies all abnormalities."

As soon as I began to practice Falun Gong, I threw away all the medicines I had taken over the past 10 years. I was used to taking sleeping pills and it was really difficult the first night after I stopped taking the pills. I was tossing and turning and couldn't fall asleep. However I did not change my resolve. After I did the 5th exercise, I turned on a small lamp and read Zhuan Falun. Though my eyes were sore, I continued the study until dawn. It was like magic; after suffering that night, I could sleep the next day. Also, my stiff and painful muscles and joints gradually healed and one day I no longer hurt. The chronic illnesses I had suffered for the past 20 years were cured without medication. I thank Teacher from the bottom of my heart.

Later, I participated in truth clarification activites. Often, I was asked by practitioners to give speeches to the public or to new practitioners to spread the Fa, telling them about my becoming healthy in body and mind. I felt that I did well. Sometimes other practitioners praised me and I was delighted. I thought I had done the three things Teacher asked -- Fa-study and exercise, sending righteous thoughts, and clarifying the truth -- well. However, "For a cultivator, all the frustrations he comes across among everyday people are trials, and all the compliments he receives are tests" ("A Cultivator is Naturally Part of It" (Essentials For Further Advancement). The remaining attachment hidden in me still had to surface.

Two weeks ago, I noticed a rash on my right hand and it was very itchy. I didn't mind at first and scratched out of instinct. Unexpectedly, my hand became itchier and the rash became open sores. The fluid made the rash spread. By the time I realized that something was wrong, the back of my right hand was red, swollen and infected. The location of the ugly rash was very noticeable. My family and friends noticed it and were worried about me. To avoid having to explain the rash, and to cover up my attachment of feeling good about my Dafa work and worrying about damaging my reputation as a Dafa practitioner, I tried to hide my right hand. I even put gauze to cover it so others wouldn't see it. The rash spread and the itchiness got worse when I tried to cover it.

I thought about it and looked inward, trying to find my gap. Was it because I had a selfish heart, just like an everyday person? Teacher constantly teaches us that practitioners should be selfless and think of others first. Did I really practice that? When I did Dafa work, did I not have the attachments to showing off and zealotry? Every time I had sickness karma, and experienced my so-called "worrying about damaging Dafa's reputation," did I really want to protect Dafa, or I was just worried about my own image?

I recalled my recent karma eliminating process, which was indeed like magic. I didn't have to stay in bed. I could still go to work and conform to everyday life. However, it did not matter if it was my previously swollen and painful foot or my most recently infected right hand, I could not hide it. It was not a coincidence! I still covered my attachment to selfishness, and Teacher hinted with the sickness karma about what I had to let go. When I read " Digging Out the Roots" in Essentials For Further Advancement,

"...I have long noticed that a few individuals do not have the heart to safeguard Dafa, but instead intend to safeguard certain things in human societyâ€¦.During your cultivation practice, I will use every means to expose all of your attachments and dig them out at their roots,"

and Lecture at the First Conference in North America,

"If you, as a cultivator, only part with things superficially while deep down inside you still stick to something or cling to your own vital interests that you don't allow to be undermined, I'd say to you that your cultivation is fake! If your own thinking doesn't change, you cannot advance even one step and are deceiving yourself,"

I felt really ashamed of myself.

The karma eliminating process taught me a very profound lesson. Though it was in the form of sickness, wasn't it still a hint for me to look within and improve my level?