One Sunday morning at the Titiwangsa practice site in Kuala Lumpur, a young man came to learn about the truth of Falun Dafa. Afterwards, he said that the Universiti Teknologi Malaysia (UTM) where he studies would hold a carnival-like campus activity. He invited us to participate so as to enrich their programs and provide more education. 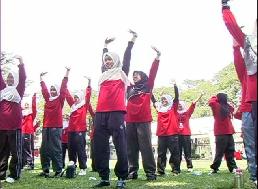 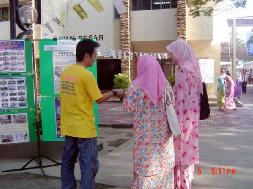 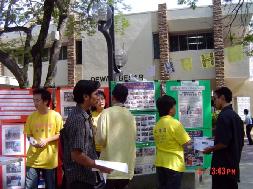 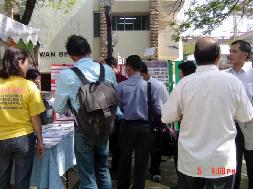 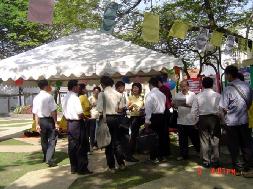 Thus, practitioners held group practice, truth clarification, and a signature drive on the campus of UTM from 3:00 p.m. to 5:00 p.m. on September 5, 6 and 9. Although that was during work hours, many practitioners actively took part in the activity. Practitioners felt that this was a precious chance to clarify the truth to students at this university. Some students immediately learned the exercises on the spot. Most students signed the petition to call for an end to the persecution as soon as they learned about the facts of Falun Gong.

The last afternoon, the university held a "sports for all". Falun Gong was selected as the main exercise to replace the quick rhythm gymnastic exercises that were usually picked in the past. At 3pm, a ten-people drum troupe entered the sports ground. They marched to the lawn. The sound of drums resounded throughout the campus. Then the "sports for all" began. Practitioners dressed in golden exercise suits led nearly 100 students to practice the Falun Gong exercises. After the exercise demonstration, some students did not feel that they had enough practice and requested to increase the practice time. The university proved their request. Practitioners help students to divide into several small groups and continued to teach them the exercises. The atmosphere was quite peaceful.

After the activity, the university cordially invited us to take part in the concluding ceremony. An edited film reviewing the activities was featured. People surprisingly found that practitioners' waist drum troupe and a young practitioner demonstrating meditation (the fifth Falun Gong exercise set) appeared on the screen. A round of warm applause sounded. Afterwards, we were invited to have dinner with the university's honored guests. A gentleman who sat beside me asked the meaning of the exercise demonstration and the waist drum performance given in the afternoon. I therefore detailed the facts about Falun Dafa to all guests at the table. I felt that they listened to me carefully and they were quite interested in Dafa. They also expressed their sympathy towards those persecuted practitioners. Later I found out that the gentleman was a dean of UTM and one of the ladies on the table was a professor at UTM. 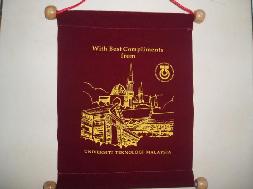 UTM presented a keepsake to practitioners to express their appreciation