The Happiness of a Life Renewed

Almost paralyzed; Doctors could do nothing

Mr. Lin Shenqi, 48 years old, is the chief of a production department in a Taiwan company. He was assigned to the northeast area of Mainland China years ago. Due to the severe weather, he started suffering from a serious disease. When he got back to Taiwan, his limbs were almost paralyzed and he could hardly turn his neck. Doctors said that it was probably due to cervical atrophy, and that there was only a 50224accossibility that surgery could successfully heal it. His neck needed to be fixed. However, if the surgery failed, he wouldn't be able to move his neck for the rest of his life. He was too afraid to have the surgery. If it failed, he would become semi-paralyzed, and he didn't want to live like that. Actually, at that time, besides his neck, his limbs were also diseased. He could hardly move them and he could only walk slowly with assistance and help while going up and down stairs. Sometimes he thought that while some people would commit suicide because of suffering from their sicknesses, he could not even do that as he could hardly move his neck and limbs.

He visited a lot of famous doctors. He also tried Chinese medicine, western medicine, massage and so on, but none of them helped. He spent 2 years suffering while searching for good doctors. Because of this situation, his company changed his assignment and only had him do very light work.

In April 25, 1999, more than 10,000 Falun Gong practitioners went to Beijing to appeal for justice for Falun Dafa. The media in China and overseas reported this event, which made the practice widely known in Taiwan. Mr. Lin read a lot of reports in the newspapers and thought that if Falun Gong could really heal sickness, he would learn it too. When asked why he was not scared by the negative reports from the CCP media, he laughed and said, "I have been to Mainland China for business and had contact with some local government officials, so I know very well the CCP lies. What they say is usually the opposite of what they do. What that government says is not reliable."

So, he read some other references. For example, there were lots of reviews and comments on Falun Gong written by professors, doctors and other elites in the society, in the newspapers. All the opinions about Falun Gong from them were very positive. They read Falun Gong books, and did the exercises. Their behavior was the opposite of what the Chinese government had described in their propaganda, so Mr. Lin decided to practice Falun Gong. 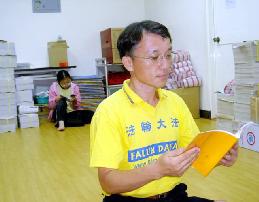 The whole family benefits from cultivation; cultivate your xinxing; consider others first

After 6 months of practicing Falun Gong, his neck and limbs could finally freely move. Therefore he cultivated more diligently and always tried to improve his xinxing level. Today, all of his sicknesses are gone and he walks as a normal person. One cannot tell that, 6 years ago, he could not even climb the stairs. Other sicknesses that he had for a long time, such as a gastric ulcer, were also healed. He didn't spend any money or take any medicine, but all his sicknesses were healed. Also, just like what Master said, "Since you practice a righteous way, your practice will benefit others." (Zhuan Falun, from the English version dated March 2000) Probably due to the benevolent environment, his family members, who are not practitioners, also were freed of their illnesses.

Although his cultivation seems to be easy now, he had a lot of tribulations at the beginning. He wife was always unhappy with it and tried to stop him from attending Falun Gong activities. For a period of time, he didn't want to see his wife. After getting off work, he didn't want to go home, and he felt like his wife was an obstacle in his cultivation, who was slowing down his improvement. One day a thought jumped into his mind, "Since there are no coincidences in cultivation, why don't I take all of these tribulations as tests of my xinxing and treat my wife as a test giver?"

"Good or evil comes from a person's spontaneous thought." (Zhuan Falun) When he changed his thinking, he found that it was not hard to face his wife every day. No matter what his wife said, he could always take it humbly. As a cultivator, he always tried to guide himself with the standard of "always placing others before ourselves," and considering others first. Gradually, his wife caused him less and less difficulty. Nowadays, although his wife is not a Falun Gong practitioner yet, when doing business, she always recommends Falun Gong and gives Falun Gong materials to her customers. The change in his wife is due to the improvement that Mr. Lin has achieved both physically and spiritually.

At the beginning, when Mr. Lin recommended Falun Gong to his colleagues, they always said, "Maybe later. Let's see what you achieve." He was not frustrated. He followed the principle of "Truthfulness-Compassion-Forbearance." Besides the fact that he became healthier and healthier, and more and more energetic every day, his selfless, considerate behavior also made his colleagues change their attitude towards Falun Gong.

In the second year of his cultivation, many of them wanted to learn Falun Gong. They said, "We see that you have become healthier and look younger. Also you are nice to people in every situation. So, we want to learn too."

So this way, his colleagues became his fellow practitioners, and his company also became an exercise site. Mr. Lin uses his lunchtime and his rest time to teach them the exercises and leads them Fa study. His colleagues said, "Before, we always felt tired after the noon nap. After practicing Falun Gong, we feel more energetic even without a nap."

His son said, "Dad, I don't think I should live like this anymore."

Mr. Lin said that his cultivation has had a big influence on his children too. He said that, before cultivating, he was like a servant to his children. When the kids were learning the piano or violin, he was always with them, serving them and protecting them. After cultivating, he realized that all the success, failure, smoothness and tribulations in one's life have karmic relationships and he'd better treat everything naturally. Therefore, he put down the attachment to his children's achievements. Instead, he just told his children to follow the principle of "Truthfulness-Compassion-Forbearance" and be a good person in any situation.

One day, before an entrance exam, his son, who never used to take anything seriously, said to him, "Dad, I don't think I should live like this anymore. I should take some review courses, and study hard for the exam." He was touched by his son's sincere words. He knew that all of his son's changes came from Falun Dafa. His son was influenced in this environment, so his original pure, kind nature appeared after all. Three months later, his son passed the exam and entered the school he wanted to go to.

Looking back at all those years, Mr. Lin keeps saying, "How lucky I have been." From a paralyzed person, he became a healthy, happy man. All his colleagues and relatives witnessed the wonderfulness of Dafa. Some of them also started cultivating, and some of them, while not practitioners themselves, support Dafa very much. Somebody said, "One step makes one footprint. There are always marks if one has been there." Although there is no dramatic miracle in Mr. Lin Shenqi's cultivation story, we can still see the power of Dafa in it.