Corporation of the Village of Cumberland
Proclamation

, Falun Dafa, also known as Falun Gong is an advanced exercise and meditation practice system of the mind, body, and spirit based on ancient wisdom, placing the utmost emphasis on cultivating the individual xinxing or mind/heart nature, by assimilating to truthfulness, compassion, and tolerance; and

, the founder, Mr. Li Hongzhi introduced Falun Dafa to the public in 1992; and

, Falun Dafa became popular through word of mouth due to its many benefits, attracting more than 70 million people around the world to study the Fa and do the exercise alone or together with others; and

, Falun Dafa has received overwhelming support form the Canadian Parliament, United States Congress, other governments and human rights groups. It remains a target of suppression by the Communist government of the People's Republic of China, which rejects freedom of conscience, expression and assembly; and

, the Communist Government in the People's Republic of China continues to persecute practitioners of Falun Dafa on the misplaced fear that they are threatened by the growing number of Chinese who regularly do the ancient exercises; and

, the Communist Government in the People's Republic of China has cracked down and arrested thousands of practitioners, 10,000 of whom were sent to labor camps without trial and other illegally imprisoned in mental hospitals and who have suffered through forced injections and psychological torture; and

, Falun Dafa practitioners have been courageously appealing to the Chinese government for their legal rights in a peaceful manner, despite continued suppression; and

, those who practice the exercises world-wide as well as international organizations such as Amnesty International - are calling for an open dialogue between the Chinese government and its citizens who practice Falun Dafa; and

, the Province of British Columbia supports the practice of Falun Dafa within its borders and throughout the world;

Therefore BE IT Resolved

that I Mayor Fred Bates, do hereby proclaim the month of May, 2005 as Falun Dafa month in the Village of Cumberland and

Therefore BE IT Further Resolved

that this body wishes practitioners of Falun Dafa success in their efforts to end the oppression and persecution in their native country of China. 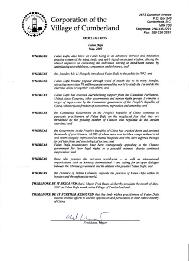 “United Nations: Report of the Special Rapporteur on the Right of Everyone to the Enjoyment of the Highest Attainable Standard of Physical and Mental Health [Excerpt]”

“France: Practitioners in Paris Appeal For an End to the Persecution (Photos)”