Heilongjiang Province Agricultural Science Institute scientist Ms. Li Guiqin was unlawfully detained at Jiamusi Labor Camp. During her detention, the guards persecuted her using the "big handcuff from behind" torture method [a very brutal torture whereby one hand is pulled over the shoulder to the back, the other hand is twisted behind the back near the waist, and two hands are handcuffed]. On one occasion, guards beat her, knocking out two front teeth and then laughed at her. 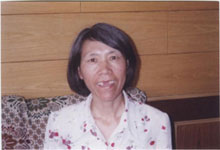 Ms. Li Guiqin was abducted and taken to Jiamusi Labor Camp on October 30, 2002. On February 17, 2003, she was handcuffed for protesting the unlawful extension of her sentence. During the daytime, she was forced to sit on the floor in a north facing room on the second floor, handcuffed to a metal bed. At night, she was handcuffed in a storehouse on the third floor. She was also forced to stand from morning to 10 o'clock at night for four days continuously.

After 2 p.m. on February 20, 2003, in a classroom on the third floor, Outpost Section guard Wang Tiejun asked Ms. Li if she was being "reeducated through labor." Ms. Li answered that she was being forced. Wang Tiejun then kicked her face, head and body brutally with his leather shoes until she lost consciousness. When she woke up, she found two of her front teeth had been knocked out and the guards were laughing.

Guards then handcuffed Ms. Li and eleven other people to iron beds and shocked them with electric batons. Guard Mu Zhenjuan tried to force Falun Dafa practitioners to acknowledge that they were being "reeducated through labor" and asked the guards to beat them. Practitioner Ms. Zhang Guiyan shouted "Don't hit people!" Guard Wang Tiejun kicked her and said, "I just want to beat people who talk too much like you." Ms. Zhang's face was black and blue for a dozen days afterwards. Policewoman Mu Zhenjuan claimed that they were being beaten because Ms. Gao Cuilan refused to shout CCP slogans. Ms. Cao Xiuxia always displayed strong resistance to the persecution. Ms. Li Siju refused to sign a "reeducation contract." Ms. Xu Xianghua read Falun Dafa articles and Ms. Xie Xuepu recited Falun Gong articles.

Ms. Li was not allowed to rest her head until 8:10 p.m. She needed two rolls of toilet paper to wipe her bleeding nose. Among the practitioners who had been tortured, eight were around 50 years old, with the eldest being 57. Ms. Xu Xianghua had a heart attack from the torture. She was still handcuffed even after she lost consciousness. Ms. Chen Xiuling was handcuffed and deprived of sleep for five days and four nights because she refused to curse as requested by the guards.

Having lost so much blood, Ms. Li Guiqin could not brush her teeth nor eat. She was extremely weak and could barely walk after the torture and physical punishment. Police even prohibited her family from visiting her for over four months so that they wouldn't see how she had been disfigured.

One time, when an inspection team came to visit the labor camp, Ms. Li Guiqin was hidden inside a storehouse.

The persecution Ms. Li Guiqin suffered in Jiamusi Labor Camp has made her very weak and emaciated. She can barely even sit up for any length of time.