Practitioner Ms. Zhang Hong was a pharmacist at the Number Four Hospital of Harbin City. She lived near the Dongli District Botanical Garden in Harbin City. In July 2004, because of her firm persistence in practicing Falun Dafa, she was sentenced to the Wanjia Forced Labor Camp in Harbin City for the second time. On July 31, 2004, the labor camp guards tortured Ms. Zhangto death. She was only 31 years old. 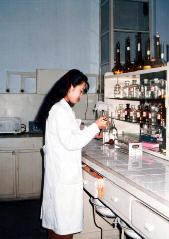 Zhang Hong at the Biochemistry laboratory

On July 22, 2004 four people carried Ms. Zhang from the Number Two Detention Center in Harbin City (in the Yaziquan area) to the training unit of the Wanjia Forced Labor Camp. By that time Ms. Zhang had been on a hunger strike for quite a few days. She was emaciated and wearing only a big sleeveless undergarment and shorts. She refused to write the Three Statements. The head of the training unit, Zhang Quiyun, handcuffed her to a bed with both hands stretched out horizontally.

Guard Yao Fuchang immediately held a meeting with the inmates who were on duty that night for monitoring other inmates. At the meeting, Yao said, "A Falun Gong practitioner was transferred here for the second time. She still hasn't written the "Three Statement" and she is very stubborn. Keep a close eye on her. Don't talk to her and don't grant her anything she asks for."

I saw that Mr. Zhang's hands were cuffed to two beds. Her feet were swollen and had turned purple. She couldn't wear shoes. She was standing barefoot on the concrete floor. I heard that she had severe heart disease due to the persecution. She wasn't allowed to go to the restroom and couldn't move her body. She was handcuffed like this for three days and three nights.

On July 27, guards Yao Fuchang and Na Dongbo held an emergency meeting with the inmates that were on duty that night. Yao said, "Zhang Hong still hasn't written the "Three Statements." She is against the government and is still on a hunger strike. Don't close the windows tonight or give her a comforter. Don't give her any water to drink. (The labor camp is in northern China. Even in summer, it is cold during the late night and early morning hours)

That night, I went to see Zhang Hong. She was lying on a bare bed with her hands cuffed to the head of the bed and feet tied to the foot of the bed. She could not move. The solitary confinement room she was in was dark, cold and damp. Even in hot summer, people would shiver with cold in this room. The walls were covered with green mold. This was the darkest room in the hell-like Wanjia Forced Labor Camp. This gloomy and horrible room was the torture chamber for practitioners. Many practitioners were tortured to death or to disability there. Monitoring equipment could be found everywhere in the labor camp except in this room. It's very clear the labor camp doesn't want people to find out how they brutally torture practitioners. A kind-hearted person put a comforter over Mr. Zhang. Yao Fuchang found out and threw away the comforter.

Ms. Zhang Hong was tied to the bed board for three days and nights. Her legs had turned purplish black. With the windows open, she was exposed to the cold wind at night. She was forced to relieve herself in the bed, which was just a wood board. The room was filled with an unpleasant odor.

Ms. Zhang's painful cries during the force-feeding were heart wrenching. Force-feeding should have been performed by professionally trained doctors and she should have been fed nutritious food. But Wanjia Forced Labor Camp ordered inmates with no medical knowledge to perform the force-feeding. Instead of nutritious food, they used concentrated saline water. Sometimes, the feeding tube was inserted into practitioners' trachea, causing the concentrated saline water to flow into the lungs, which would often lead to death from suffocation.

Ms. Zhang was given intravenous infusions (IVs). Guard Yao Fuchang ordered people to soak the IV solution in ice-cold water before administering it to her. All the torture methods, including the cold IV, open windows, no comforter at night, not allowing her to use the restroom, the cold and damp room, the bad odors, beating, scolding, shocking with electric batons, and force-feeding, pushed Ms. Zhang to the brink of death.

Starting from July 27, under the guards' order, the only people who could see Ms. Zhang were the inmates who were in charge of monitoring and torturing her. These inmates were the hatchet men for the guards. Practitioners who refused to write the "Three Statements" were brutally tortured by " Hanging Up," (a torture method in which the practitioner is hung by the cuffed hands with the feet just off the ground, causing excruciating pain as the handcuffs cut into the skin), shocking with electric batons, sitting on the iron bench, beating, squatting on a piece of brick, and more.

After a while, we didn't hear Ms. Zhang's voice. A witness reported to us, "Guard Yao Fuchang covered her mouth with plastic tape to stop her from screaming." After that, we don't know exactly what happened to her before her death.

At around 2:00 pm on July 31, 2004, I saw guards wearing masks and gloves carrying Ms. Zhang away on a stretcher. The guards told us that they were taking her to the hospital since she was sick. We later found out that she was dead.

In order to cover up the labor camp's criminal acts and attempt to get away with the murder, on August 5th 2004, the labor camp changed the solitary confinement room where Ms. Zhang was held (the interrogation room) into a clinic. A new sign reading "Clinic" was put up, and several beds were put in the room. They wanted to trick the investigation staff into believing that Ms. Zhang didn't die from brutal torture, but from natural causes. They also destroyed all of Ms. Zhang's clothes. It was said that the head of the guards, Wu Hongxun, tried very hard to cover up guard Yao Fuchang's murderous acts.

No matter how hard the Wanjia Forced Labor Camp tries to cover up the murders of Zhang Hong and other Falun Gong practitioners by guards like Yao Fuchang, they won't be able to escape the consequences. Guards like Yao Fuchang are supposed to enforce the law. Yet they themselves have violated the law by using unspeakable torture to kill practitioners. Their actions are blatant challenges to the justice system and trample both the law and human rights.

Since the persecution is still going on and tragedies like this are still happening every day, we urge people from all circles to lend a hand to stop this brutal persecution of Falun Gong practitioners.

“The Story of My "Older Sister"”

“Eliminate Another Kind of Interference”