Finding the Way After Years of Searching (Photo)

(Clearwisdom.net) What is it about Chinese wisdom that appeals so much to an outstanding American young man? What motivated him to hold seminars about China in his hometown and why did he say that Taiwan has kept the best of the Chinese culture?

Matt is about 6 ft. 2 in., and his family was originally from Europe. His demeanor resembles that of a traditional Chinese scholar: modest and thoughtful. He was born in 1972 in Rochester, New York. His parents are university professors and his family has been Christian for generations.

Under the influence of his parents, Matt excelled in school, and was very active in community charitable activities. In addition, he was good at sports. He played for a national baseball team and went to Beijing for a game. He is outstanding in many different ways.

Enticed by the Beauty of Chinese Culture

Matt reads extensively and is very kind. He always has questions about life, like: "Why are we here?" Things changed after he studied at St. Michael College in Vermont and took courses in Asian philosophy. He was astounded by the profound knowledge of Buddhism, Confucianism, and Taoism. He was so excited, and read more and more. In his second year, he moved to Philadelphia in Pennsylvania, and transferred to Swarthmore College, one of the best colleges in America.

He was having a lot of fun at Swarthmore College, which provided him with an excellent academic environment to study Asian philosophy. Soon after, he had health problems. A serious illness was spreading quietly inside him.

He was athletic, healthy, and strong, but during his sophomore year he lost a lot of weight. He was allergic to many kinds of food. He vomited, had diarrhea, and his digestive system was weakened. Matt was skin and bones within a short time. No doctors could diagnose his illness. He had to quit school and went home to recuperate.

When he was suffering from the disease, he started to think about life and death. He asked, "What is the meaning of life?" At this point, he saw the word "compassion" flashing by. He made up his mind that he would become a more compassionate, empathetic, and helpful person if he was ever back on his feet again.

While resting at home, Matt spent 500 dollars every month to learn qigong from a well-known qigong master from China. Every day he practiced for hours. He also went to Toronto, Canada to see a traditional Chinese doctor for acupuncture and herbal medicine. He even carried his own pot to prepare the herbal medicine. His health gradually improved. A year and a half later, he resumed his studies at Swarthmore College and the seed to learn more about qigong had been planted in him.

When he was a junior, Matt started to learn Chinese, traditional Chinese prose and Confucianism. Every time he learned something, he felt enlightened. The qigong master was so impressed with Matt that he would teach Matt all he knew, even his best kept secrets. Then Matt found out that the biggest problem with qigong masters was that they only did the practice, and they did not care about moral improvement.

According to what he learned in the ancient books, there is a great inner meaning in qigong. Phenomena such as the mysterious pass, yuanying, and meditation all suggest that inner cultivation is the key. The modern qigong masters, however, do not talk about these things. They only talk about keeping fitness and maintaining health. They behave the same as ordinary people. On the other hand, books on Buddhism and Taoism focus more on improving character, but lack the means to transform the body. Matt was very puzzled over this discrepancy.

Matt thought he knew enough about qigong and he even thought about taking the advantages from both schools and inventing a new practice. During his senior year in the university, he came across Falun Dafa, the great and all-encompassing practice.

In February 1999, he went with his wife Emily on their first date to the Chinese festival organized at the University of Pennsylvania. Amongst the performances and folk arts booths, he found a display on Falun Gong, which immediately attracted his attention.

The person manning the booth was a professor and a Ph.D. student at the University of Pennsylvania. After discussing with Falun Gong practitioners, Matt was astounded. Their understanding of qigong was much more in depth than his. A complete cultivation system was in front of him. He was so excited that he grabbed Emily's hand, went to the bookstore, and bought the book Zhuan Falun. After he read the book, he participated in the nine-day workshop. Many of his classmates from the qigong class also followed Matt's footsteps and became practitioners. 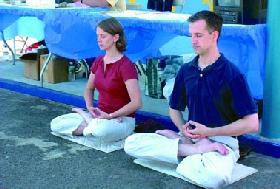 Meditation and exercise -- one of the couple's favorite things to do

Dramatic Changes in Mind and Body

On the first day of the workshop Matt witnessed symptoms of his earlier ailment return, such as diarrhea and vomiting. But this time he was energetic and had a good appetite. He knew from the study of Zhuan Falun that this time around it was karma being removed, the roots of the illness being dug out. In the course of the nine-days workshop he gained 10 lean pounds and found himself free at last of his longstanding food allergies.

Upon learning the fifth exercise, Falun Gong's meditation, Matt found that he could soon sit for one hour with both legs crossed, whereas in the past he could never so much as cross both legs. But the changes in his body, however great, were small in comparison to the positive changes he experienced in his mind. So delighted was he at having found what felt to him the perfect practice.

Matt's family noticed changes in him. He was free at last of health problems, and this time without spending a penny. His disposition improved markedly. He had been for years nervous, anxious, impatient, competitive, and argumentative. Today he stands a different person.

Before taking up self-cultivation, Matt was at a loss for what to do about the negative traits of his personality, though he could detect them. That changed after starting cultivation, however, for he found that they were now easily mended.

Matt excelled during his years in school, graduating with one of the highest grade point averages at his college and gaining privileged membership in Phi Beta Kappa. His relations with his parents and friends also met with positive changes. Those around him, such as his girlfriend, a Baptist, and his parents wished to learn more about the practice he had found.

So much did Matt benefit from the practice of Falun Gong that it deepened and enkindled anew his interest in Chinese culture. He received a one year fellowship around the time of graduation on the basis of his academic merits for further study of the Chinese language at Tsinghua University. Little could he anticipate, however, what he was about to witness in China.

Matt felt in his element at Tsinghua University, enjoying the opportunity of time with a range of thoughtful and engaging students from universities such as Harvard and Yale.

Every day at dawn and early evening, hundreds of faculty, staff members, and students would practice Falun Gong together throughout the campus. Matt joined them. That would change abruptly, however, beginning midnight on July 19, 1999. It was that night Chinese authorities arrested all of the "key" contact persons of Falun Gong. Matt knew nothing about the arrests, however, as he was preparing for exams. But that night he was engulfed with nightmares--something odd, in that he usually slept soundly. He dreamed that police were storming his and other residences, hounding and arresting many innocent people. He was awakened several times by the nightmare.

Later Matt learned that in fact many persons had been arrested that for their practice of Falun Gong. In the days that followed many practitioners, including from Tsinghua, went to petition Chinese authorities and explain how they had benefited from the practice. Numerous innocent people were arrested and their rights deprived. Many were tortured and forced to give up their practice.

Two days later Matt went to the practice site early in the morning and found no one there. Instead, a sign was posted, reading, "Assembly and Conversation Not Allowed." All media, including radio and TV broadcasts, that day proceeded to denounce Falun Gong. Astounded, Matt called family and friends in the States. They were very shocked, "Why are the authorities banning a practice that benefits so many people?"

An atmosphere of fear gripped the university. Students and faculty who supported Falun Gong were suspended and sent home for "reform" measures. Matt lost contact with his two closest Chinese friends, who refused to renounce Falun Gong. It was unbelievable what innocent people were going through. At first, Matt tried to stay in touch with the outside world via email. Soon he was told that police were monitoring him and his phone and email were being watched. Frustrated, Matt felt it impossible to continue his studies and came back to the United States.

Rescue Efforts from Outside China

Back in the United States, Matt could not forget the suffering of the kind people he had come to know in China. He thought about what he could do to help. He spoke at a variety of venues, several times on invitation. Audiences proved to be captivated by matters of qigong and traditional Chinese medicine, in particular what these traditions had to say about the universe and the human body. Many signed petitions and spoke out upon hearing that Jiang Zemin was persecuting the practitioners of Falun Gong in China.

Matt's parents were among the many who wrote to President Bush, wishing to draw attention to the human rights abuses happening in China. Falun Gong has spread to over 60 countries and has met with praise by many local governments; when people learn of what is happening in China they condemn the violation of freedom of belief.

Cherishing the Culture and Freedom Offered by Taiwan

Matt went to Taiwan to further his research and studies. He is of the conviction that Chinese culture is best kept in Taiwan, rather than the mainland.

For what reason does he say this? Taiwan is small, but it is democratic and its many different ethnic groups live in harmony. In Taiwan China's traditional culture has been kept intact, people enjoy freedom of belief, and there are over 300,000 persons who practice Falun Gong. In China, by contrast, traditional culture and its material remnants met with destruction in the Cultural Revolution and human rights abuses are widespread.

During this interview, Matt said that he felt safe in Taiwan and respected; in the classroom he found that he and others could talk freely about their beliefs. His wife Emily has joined him in Taiwan, where she teaches English.

Matt credits Falun Gong with giving him good health and a sense of joy in his life. He has chosen Sinology as his field of study. The beauty and offerings of Taiwan are something to be cherished, as he sees it.

“The Power of a Letter to Encourage Diligence”

“All People Have Come For Falun Dafa”