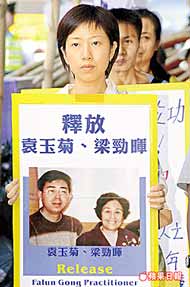 According to an Apple Daily report on July 28, NTDTV reporter Liang Zhen's mother and elder brother in Mainland China were arrested on criminal charges by local police on July 19. President of Hong Kong Residents Supporting China Democratic Movement Union Situ Hua stated that countless people in Mainland China, including journalist Cheng Xiang, are imprisoned. Some have even been tortured to death. If their family members were to worry about retaliatory measures and would not dare to make their voices heard, it would only encourage similar incidents to take place. As long as outside people keep paying attention to such incidents, the detained people will eventually be able to get out of detention alive.

Liang Zhen is in charge of gathering political news in Hong Kong. Her mother Yuan Yuju and brother Liang Jinhui are currently detained in a detention center in Luzhou City, Sichuan Province for their practice of Falun Gong. More than 10 practitioners and other citizens marched from the Charter Garden to the Chinese Liaison Office to demand that the Chinese communist regime release all imprisoned dissidents and Falun Gong practitioners. Although Situ Hua did not participate in the march, he went to the Charter Garden to show his support.

"If your family members encounter trouble, you must stand up for them. Some people might question, what will you do if they [the Communist Party] take revenge on your family members? However, if you stand up, at least your family members will not quietly disappear from the world. Therefore, you should not only expose their situation, but you also need to arouse attention from both within China and countries outside China. Eventually, the imprisoned people will get out of detention alive." Situ Hua hoped that those Chinese Communist Party members who have not yet quit the party will awaken their conscience and show concern for the imprisoned dissidents.

Reports on the Situation

According to a Chengpao report on July 28, Hong Kong resident and journalist Liang Zhen's mother and brother were arrested by Mainland police on a trumped up "criminal charge" on July 19 for their practice of Falun Gong. Up to the present, the police have not disclosed anything about the two detainees' current situation. Chengpao reported that Hong Kong Falun Gong practitioners marched to the Chinese Liaison Office to urge the Chinese communist regime to release all imprisoned Falun Gong practitioners.

NTDTV correspondent in Hong Kong, Liang Zhen, moved to Hong Kong in 1999. Her 62-year-old mother Yuan Yuju and 36-year-old brother Liang Jinhui, as well as more than 10 other practitioners of Falun Gong, were forcibly arrested by local police on July 19 in Luzhou City, Sichuan Province. They are now detained in a detention center. Liang Zhen's nearly-70-year-old father, who is suffering from high blood pressure, is left at home with no one looking after him. Liang Zhen urged the police to allow her to visit her mother and brother and her father, but her request was denied. Because of her brother's health, he needs to take medicine periodically. "What I can do here is to stand up and expose the incident and demand that the Chinese communist regime release my family members unconditionally." President of Hong Kong Residents Supporting China Democratic Movement Union Situ Hua said that the Chinese communist authorities arrested Liang Zhen's family members without providing any evidence or going through an open trial. He said that people must bravely oppose the suppression and persecution. Hong Kong Falun Dafa Association spokesperson Zhang Qixian said that the police arrested more than 10 Falun Gong practitioners in Luzhou on July 19.

According to a Mingpao report on July 28, President of Hong Kong Residents Supporting China Democratic Movement Union Situ Hua attended the Falun Gong activity and spoke at the press conference in support of NTDTV journalist Liang Zhen's mother and brother, who are imprisoned in Mainland China. Situ Hua said, "All organizations suppressed by the Chinese communist regime support each other."

Liang Zhen's mother Yuan Yuju and brother Liang Jinhui are practitioners of Falun Gong. They were arrested on July 19 on false criminal charges. Situ Hua expressed that Liang Zhen's revealing the facts would at least prevent her family members from quietly disappearing from the world. He hoped that those Chinese Communist Party members who had not quit the party would not assist the evildoers in the persecution of Falun Gong or other groups.