Practitioner Ms. Ren Shujie from Shenyang, Liaoning Province Is at the Brink of Death from Torture (Photo)

Ms. Ren Shujie was detained in the Longshan Forced Labor Camp and the Masanjia Forced Labor Camp for three years for cultivating Falun Dafa. During that time she endured inhumane persecution. She could not eat normally after returning home due to her mistreatment in the labor camps. She is now so weak that she is dying. 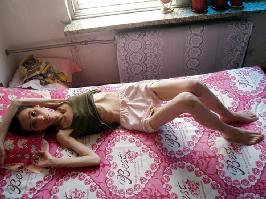 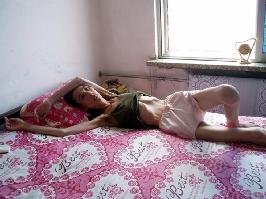 Ms. Ren Shujie, 42, is a practitioner from the Tiexi District of Shenyang in Liaoning Province. She previously owned a fabric shop in the Donghu Market in the Hong District. Ms. Ren started practicing Falun Gong in 1998 and benefited mentally and physically. After she became a Dafa practitioner, Ms. Ren became honest and kind and enjoyed helping others. Her customers and the other shop owners regarded her as a good person.

On May 21, 2002, officers from the Zhonggong Police Station, under the Tiexi District Police Department in Shenyang, abducted Ms. Ren Shujie and sent her to three years of forced labor. They detained her in Team Two of the Longshan Forced Labor Camp. After she arrived at the labor camp, Ms. Ren started a hunger strike that lasted for 64 days. The long hunger strike severely affected her health. Nevertheless, two weeks after she started the hunger strike, team leader Tang Yubao, disregarding her weakness, arranged for her to be "reformed" (brainwashed). The officials deprived her of sleep for seven consecutive nights. Because Ms. Ren went to bed to rest following the camp schedule, Tang Yubao used two electric batons and shocked her for thirty minutes.

People at the scene included Liang Hong, Ma Wei and others. Falun Gong practitioners Ms. Gong Huijie, Ms. Sun Ying, and Ms. Cai Baoju also saw Tang Yubao's vicious act. Because Ms. Ren persisted in her belief and did not give in, Tang Yubao got so exasperated that he threatened, "If you don't reform we will send you to Dabei Prison." Ms. Ren was unmoved.

Besides brainwashing, Longshan Forced Labor Camp officials also forced practitioners to do the extremely heavy manual labor of processing candles for export. They had to work from 7:00 a.m. until 10:30 p.m. The slave labor facility was on the second floor. Practitioners had to carry the candles upstairs and then downstairs and got so tired that they could hardly stand upright. To resist such inhumane abuse, on February 4, 2003, Ms. Ren, Sun Yan, and Su Weihuan started a hunger strike. Policeman Tang Yubao still ordered the three of them to work and threatened, "I want to see who doesn't work!"

On the fifth day of the hunger strike, under the extreme duress of physical and mental persecution, Ms. Ren violated Falun Dafa's prohibition on taking any life, including one's own. In her desperation, Ms. Ren swallowed pieces of glass, in an apparent attempt to take her own life.

The prison police sent Ms. Ren to the No. 2 Hospital of the Medical University. The hospital refused to admit her. Two days later Tang Yubao, team leader Wang Chunmei, and Liang Zhen sent her to the Army General Hospital. The hospital's diagnosis stated "torn esophagus from glass, having produced a hole." The doctor placed a "protective net" inside her esophagus and requested that the prison police bring her back in 20 days to remove it. When the prison police finally brought her back 40 days later, the doctor told them that because of the delay, the net had become permanent and could no longer be removed. The doctor also said that Ms. Ren would only be able to ingest fluids from then on. Since then, Ms. Ren Shujie has been unable to eat normally, and her health has declined daily.

In mid-June 2003, a disabled, elderly practitioner named Huang Shixiang suggested that Tang Yubao remove the Falun Gong founder's picture from the floor that was put there for people to tread on. Tang Yubao beat her viciously and shocked her with an electric baton. Ms. Ren told Tang Yubao to treat older practitioners kindly. Tang also shocked her with an electric baton and kicked her. Ms. Ren's mouth was swollen and drooped, her eye sockets were bruised and swollen, her eyes were bloodshot, her face was disfigured, and her body was covered with bruises.

In March 22, 2004, Longshan Forced Labor Camp authorities sent Ms. Ren Shujie to the Masanjia Forced Labor Camp. She was ordered to sleep on the cold floor for three months. Ms. Ren Shujie's face swelled, and her legs showed signs of severe edema. Each time a spot was pressed, an indentation would remain. Ms. Ren also held a hunger strike during that time. Since Ms. Ren could not eat normally, she was extremely weak at the time of her release from the labor camp on December 24, 2004.

Because she still had the "net" inside her esophagus, Ms. Ren was not able to eat normally after she returned home. She has grown weaker and weaker, and her vital signs have been precarious several times.

Fellow practitioners, please send forth righteous thought to support Ms. Ren Shujie and eliminate the old force's dark minions and rotten ghosts, the CCP evil pestilence and all of its evil factors.

“The Epoch Times: Former Chief of Shengyang Justice Bureau speaks of his exile”

“Practitioners in Jilin City Expose the Persecution to the Local People, Call for Severe Punishment of Gao Rongrong's Murderers (Photos)”